January Tea and a Book — Penny Plain by O. Douglas

I’m getting back in the swing of things!

After a year of struggling with attention span, ending with a very sad December in which we had to say goodbye to our dear kitty, I find myself craving sweet, simple reads. Lately I found a balm for my heart in Penny Plain (1920), by O. Douglas. 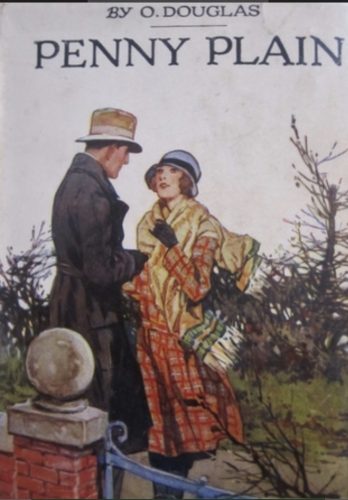 Goodreads describes this book as “The Cinderella story of Jean Jardine, a Scottish girl raising her younger brothers on her own… until a mysterious stranger asks for her hospitality. Part romance, part family story, and part small town semi-satire,” and that seems a good enough place to start.

I found the novel quite sentimental, but that happened to be exactly what I needed. In some ways its focus on the daily lives of provincial women reminded me of Elizabeth Gaskell’s Cranford. There are plenty of men & boys in the story, however, including Jean Jardine’s charming brothers, one or two clergymen, along with a handful of suitors and benefactors. There’s a great deal of chatting and tea drinking, as well, along with entertaining exploits of the boyish sort. There are quite a few ruminations on faith. Perhaps there’s an overabundance of dialect for a modern audience, but it’s easy enough to scan without missing anything important.

I loved that this story was about a caring community. There are some difficult personalities here and there, but most of the characters are genuinely kind and eventually have a positive effect on the self-absorbed, priggish types.

My favorite part of the narrative was when our heroine and her brothers enjoy the great adventure of traveling by motor, staying in a hotel, and enjoying all the delights of Stratford-upon-Avon!

Jock and Mhor were in the highest spirits. It seemed to them enormous fun to be staying in a hotel, and not an ordinary square up-and-down hotel, but a rambling place with little stairs in unexpected places, and old parts and new parts, and bedrooms owning names, and a long, low-roofed drawing-room with a window at the far end that opened right out to the stable-yard through which pleasantries could be exchanged with grooms and chauffeurs. There was a parlour, too, off the hall—the cosiest of parlours with cream walls and black oak beams and supports, two fireplaces round which were grouped inviting arm-chairs, tables with books and papers, many bowls of daffodils. And all over the house hung old prints of scenes in the plays; glorious pictures, some of them —ghosts and murders over which Mhor gloated.

And later, our heroine visits Anne Hathaway’s cottage and enjoys an afternoon of dreaming and fangirling…

This ingle-nook … Shakespeare must have sat here on winter evenings and talked. Did he tell Anne Hathaway wonderful tales? Perhaps, when he was not writing and weaving for himself a garment of immortality, he was just an everyday man, genial with his neighbours, interested in all the small events of his own town, just Master Shakespeare whom the children looked up from their play to smile at as he passed.

This is an old-fashioned sort of story, very sweet and soothing. It’s also a product of its time, and you’ll notice a few expressions of mildly upsetting early 20th century perspectives. Overall, however, it is brimming with affection and good intentions. It truly lifted my spirits! 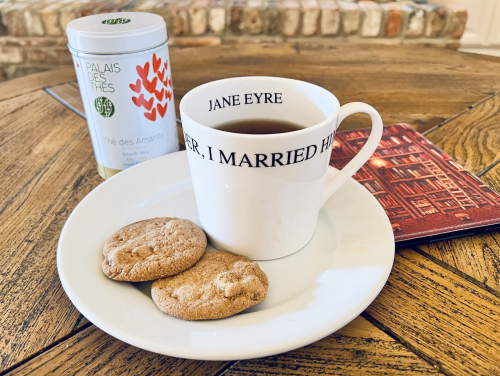 And now…TEA! As you see, I chose my Jane Eyre mug because of the similarities between that fine young lady and our Jean from Penny Plain. For tea there is Thé des Amants, “tea of the lovers,” from Palais des Thes. This is a black tea flavored with apple, almond, cinnamon, vanilla and ginger. It pairs best with chocolate, according to the purveyor, but I enjoyed it with ginger biscuits, which seem more English to me.

Thank you so much, my friends, for stopping by. Please stay tuned, as I plan to read many marvelous books this year! 😀