February Tea and a Book: The New Moon with the Old, by Dodie Smith

For February’s “Tea and a Book” I am recommending THE NEW MOON WITH THE OLD, first published in 1963 by Dodie Smith. Smith began her writing career with plays and soon turned to novels. (Eventually she became a screenwriter, as well.) I CAPTURE THE CASTLE is my favorite of her novels and probably numbers among my top 10 favorite novels of all time.

THE NEW MOON WITH THE OLD is quite a different story, which isn’t a bad thing, at all. Four young adults and their secretary/housekeeper are left in the lurch when the family patriarch leaves the country to evade arrest for financial crimes. Each of the five must now find their own way, and the choices they make are highly entertaining and sometimes preposterous. As I mentioned on Goodreads, it did seem toward the end that Smith was struggling to tie up all the loose ends. That said, I loved the characters and I devoured this rather chunky book (an American first edition!) in two and a half days. It was a delightful read. 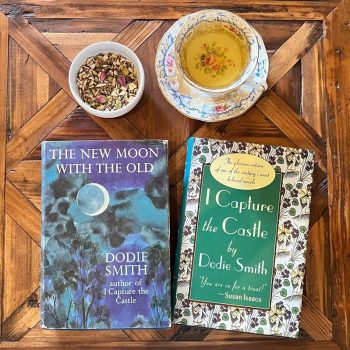 Sadly, it seems there is no digital version of the story, but there are used copies to be found out there.

For tea I suggest Organic Chamomile Calm from Tea Palace. “This delicious, caffeine-free cup boasts whole organic chamomile flowers, known for their calming and anti-inflammatory qualities; pure organic pink rose petals said to soothe stress and worry; and pure organic lavender, acknowledged for relaxing properties. This blend is also loaded with vitamin c, antioxidants and histamine reducing compounds to boost the body whilst calming the mind.” I love this tea, but be careful not to over-steep as it can turn a little bitter.