Here we are with the final chapter of 2020’s Spooky Film Recommendations. I intended these to be “ghost-free” horror, but a few ghosts wormed their way in despite my best efforts. The films are listed in the order that I viewed them. As always, all synopses are from imdb.com. 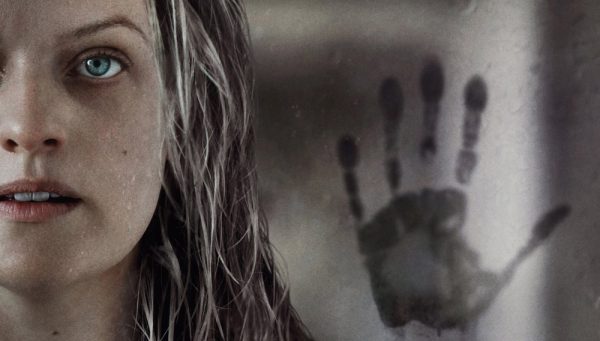 The Invisible Man (2020) — Rated R
When Cecilia’s abusive ex takes his own life and leaves her his fortune, she suspects his death was a hoax. As a series of coincidences turn lethal, Cecilia works to prove that she is being hunted by someone nobody can see.
Writer/director Leigh Whannell certainly puts a new spin on the H.G. Wells story, twisting it into a cautionary tale about domestic abuse on a supernatural level. I’ll be honest–it is HARD to watch at times. But as viewers we know in our bones that our heroine is not delusional, so it’s worth our while to stick with her. (You’ll feel like you’ve been through the ringer.) Elizabeth Moss is phenomenal.
Watch the Trailer / Options for Viewing / Metascore: 72

The Wailing (2016) — — Rated TV MA (it’s a hard “R” in my book)
Soon after a stranger arrives in a little village, a mysterious sickness starts spreading. A policeman, drawn into the incident, is forced to solve the mystery in order to save his daughter.
This film is a 2 1/2 hour slow burn into stomach-turning, full-on horror. As when I was watching The Exorcist, at one point I had to turn the TV off and walk away. But the next day I sat back down to finish it because I HAD to see these characters through to the end. There’s suspense, misdirection, violence, gore–ALL the horror things you could ever want. In addition, the characters seem real, and you will feel their terror and pain. It’s rather exhausting! And also strangely beautiful. I couldn’t quite absorb it all, but I won’t be watching it again anytime soon. If you like complicated and deeply unsettling horror that takes its time to unfold, try this one.
Watch the Trailer / Options for Viewing / Metascore: 81

Scare Me (2020) — Unrated? (I would say PG-13/R for adult themes, language, drug use, and discussion of violence)
During a power outage, two strangers tell scary stories. The more Fred and Fanny commit to their tales, the more the stories come to life in their Catskills cabin. The horrors of reality manifest when Fred confronts his ultimate fear. [NOTE: Do not confuse this with the other 2020 movie titled Scare Me — BLEH!]
I’m a fan of Aya Cash from You’re the Worst and The Boys and she is perfect here as the cocky, best-selling horror author who challenges her host to a scary storytelling contest. (Of course, the pizza delivery guy turns out to be one of her biggest fans, and he joins the fun, too.) Josh Ruben wrote, directed and stars in this film as Fred, the sensitive wannabe horror writer. The script is darkly fun, and actually features a lot of good commentary about storytelling. It might just surprise you.
Watch the Trailer / Options for Viewing / Metascore: 62 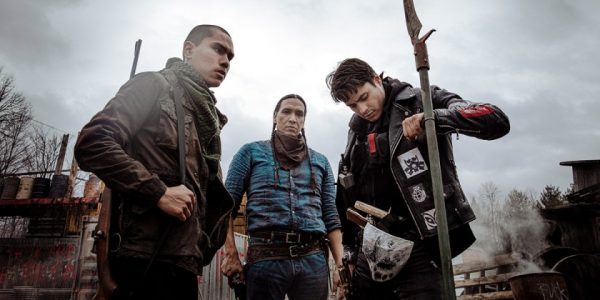 Blood Quantum (2019) — Not rated (I would say it’s a solid R for language/violence/gore)
The dead are coming back to life outside the isolated Mi’kmaq reserve of Red Crow, except for its Indigenous inhabitants who are strangely immune to the zombie plague.
I loved this movie so much, and it is the only one of this year’s offerings to make me cry at the end. The story hook is fabulous, but it was the characters who really tugged at my heart. Yes, it’s a zombie apocalypse movie. But it’s also wonderfully character-driven and chock-full of fascinating personalities and relationships. I like this comment from Scout Tafoya, reviewing for Consequence of Sound: “Not every story of the abused and neglected tribes all over the country has to be just about suffering. That’s what makes Blood Quantum an important step for native filmmaking: It’s a successful and frequently fun horror movie, and what’s more, a thought-provoking missive that turns old paradigms about whites and native relations on their head.”
Watch the Trailer / Options for Viewing / Metascore: 63 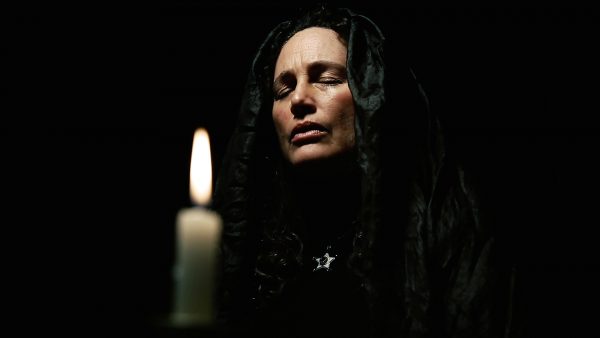 The Deeper You Dig (2019) — Unrated (PG-13/R-ish?)
In the aftermath of a roadside accident, the line between the living and the dead collapses for a mother, a daughter and a stranger.
This may be my favorite film of the 2020 collection. First of all, I love that it’s a family production. John Adams and Toby Poser co-wrote and co-directed this film as well as starring in it, and their daughter Zelda Adams plays a crucial role. I love the film’s gritty realism and quirkiness. Really, it has the feel of an A24 film, only without the special effects budget–and for me that’s a plus! It is gorgeous and incredibly disconcerting at the same time. Glenn Kenny at rogerebert.com: “In addition to crafting a story that, while not entirely unfamiliar, has enough perverse twists to feel fresh, the Adamses, while working with a low budget, practically revel in the mechanics of moviemaking. Individual shots play with focus and lighting in ways that yield substantial horror-movie bang, and their concoction of settings that create a surreal contrast to the rural locations is always satisfyingly crafty.” I want to see every movie these artists have made!
Watch the Trailer / Options for Viewing / Metascore: 75