Without quite meaning to, I managed to strike off one of the reading resolutions I mentioned earlier — reading a book written the year I was born.

I first read about Antonia Barber’s The Ghosts at my agent’s blog, where she mentioned it as an example of the sort of spooky middle-grade ghost story she would like to represent. I knew I had to track it down, since I would love to write that spooky middle-grade ghost story for her, but the book was long out of print. Fortunately, I was able to find a used hardcover that once belonged to the Herbert Symonds School in Montreal, Quebec. (I find this delightful.) 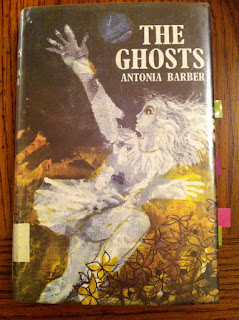 Turns out, as you might have guessed, that the book was published the year I was born! You can see the full jacket in all its creepy glory here (courtesy of Laird of Kiloran).

The story is about an impoverished family living in London (a widow and her three children) who are approached by a strange old man with the offer of a job as caretakers to an empty manor house in the country. The only problem? There are rumors of ghosts. Just my sort of thing, as you might have guessed! But . . . it’s quite a complicated story. Very Gothic, yes, but with a helping of sci-fi to make things even more interesting. I won’t say anymore, except that the story reminded me a bit of certain tales from Madeleine L’Engle.

I love passages like this, where Lucy’s spirits are bolstered by the country landscape:

They walked on along the narrow path which led through a wood where brilliant leaves burst from tree-buds overhead and folded yellow daffodils opened in a bright carpet along the ground. It was very different from the grey littered pavements of Camden Town and, looking about her, Lucy felt her spirits rise in spite of everything. It is hard not to be hopeful in the woods in April. (73)

In addition to the mild spookiness and page-turning suspense, there’s a very sweet and gentle theme of faith running through the story (which also reminded me of L’Engle, and C.S. Lewis, too), as evidenced by passages like this:

She closed her eyes and concentrated very hard but it didn’t seem to do any good. Perhaps faith isn’t like that, she thought. Perhaps it isn’t something you force yourself to, a battle that you fight in your mind, but something that comes when you stop fighting, when you admit that you can’t manage it alone. And then it just grows in you, like bluebells coming up out of dark decaying despair. (162)

If this sounds interesting to you, maybe you can find it at your library? Or you might peruse the used copies at Amazon. Apparently the book was adapted into a film entitled The Amazing Mr. Blunden, and in the UK the tie-in books were retitled accordingly.