For the first time in a while, I woke with the itch to blog! And it’s all Jane Austen’s doing.

First, some context: For the past week, I’ve been dealing with flu. That’s right — I didn’t get my flu shot. In fact, I’ve never had one. But after days of pain, sweats, chills, and general misery, followed by days of exhaustion and general puny-ness, I’ve decided that maybe a yearly flu shot is not such a bad thing after all. It never got to “state of emergency” levels, but it was no fun at all. This morning the birds are singing and I actually feel stirrings of energy. Hooray!

Did you know yesterday was the 200th anniversary of Pride and Prejudice? A lot of you did, because I saw several posts about it. One of my favorite blog posts can be found at Relatively Entertaining, where my friends C and E give an overview of noteworthy film and book adaptations of the story.

One of the adaptations they mentioned is The Lizzie Bennett Diaries, a web series that I finally started watching yesterday. The short episodes are perfect rewards for progress with first pass pages. Very addictive, but I’m a little daunted to learn that I have about 70 eps to go before I’m caught up! 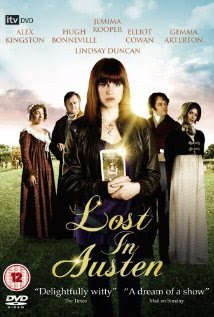 One adaptation they didn’t mention is Lost in Austen. Am I the only one who thought this zany mini-series starring Jemima Rooper was a hoot? Parts of it made me scream with laughter, you guys! Most interesting was how it helped me see Bingley and Wickham in a new light. You can watch it all on YouTube, if you like! Just keep in mind that it’s wacky. 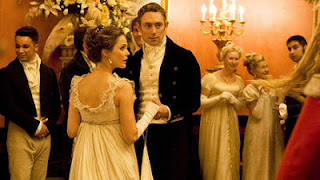 And OH, how I’m looking forward to the film adaptation of Shannon Hale’s Austenland! First of all, it’s an adorkable story. Second, the film stars cutie-patootie Keri Russell and costume drama favorite J.J. Feild (Mr. Tilney!). And Jane Seymour! And more! Can’t wait for this one.

It’s a great time to be an Austen fan, eh?