— First, I wish to link you to Caroline Starr Rose’s blog series on Navigating a Debut Year. I freely admit that I went a little wacko (okay, a lot wacko) during the debut of The Revenant, and thus her resolutions resonated quite powerfully with me. (And her gorgeous novel May B. is such a favorite of mine.)

— Tuesday before last, I spoke at the SCBWIOK Schmooze in Tulsa. A lovely group of writers attended, and they listened patiently as I babbled on about turning points in my writing journey. Thank you for the invite Helen Newton!

— Thursday before last, I visited the Catoosa Public Library. (Interestingly enough, Duran Duran will be performing at the Hard Rock Cafe in Catoosa later this year, but that’s a story I’ll be telling in August.) I was pleasantly surprised by the size of the crowd (Librarian Kathy Willis must have HUSTLED to get them there), and I had a great time answering questions and signing books.

— On the drive back to Norman I learned from my editor that The Revenant had won a 2012 Parent’s Choice Silver Award. I was over the moon! The accompanying review was particularly delightful.

— This past Thursday I visited the John F. Henderson library in GORGEOUS Westville, Oklahoma. It was a very “intimate” gathering, as they say — a woman, her two granddaughters and JFH librarian Sue Ann Ghormley — but it was perfectly wonderful. They had heaps of great questions, and I thoroughly enjoyed chatting with them.

— But the big event of last week was my gig in Tahlequah with the Cherokee Nation Foundation and their Cherokee Teacher Enrichment program. I’ve met monthly with the teachers since March, and from Sunday to Friday we worked 10 hour days as they wrote, revised, and illustrated their own books for children.

It was a life-changing experience. It’s impossible to adequately describe how inspiring it was for me, but I can share a few photos: 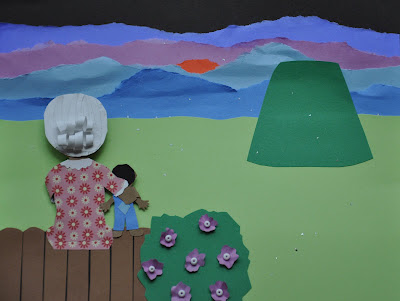 Here is a scene from Glenda Deatherage’s Spirit Defenders of Nikwasi, featuring a grandmother and grandchild contemplating a sacred mound against the backdrop of the Smoky Mountains. The cut paper is exquisite, isn’t it? Learn more about the Nikwasi Indian Mound here. 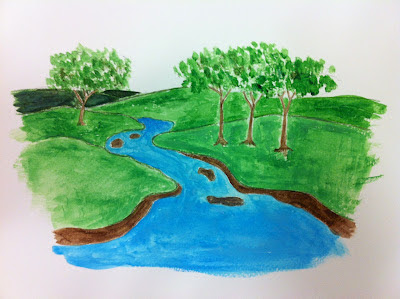 A river scene from Terri Martindale’s Galilo Gets Married (based on the traditional story The Owl Gets Married.) 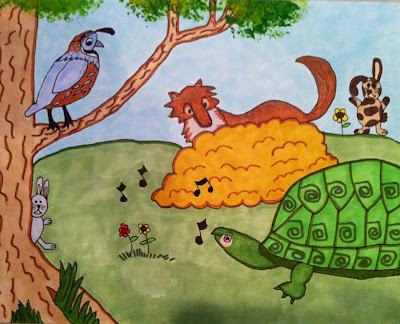 A scene from Susan Cox’s How the Quail Lost Its Voice, illustrated by her granddaughter. 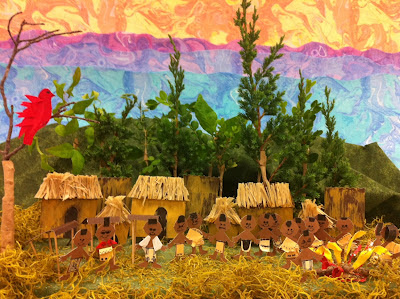 A stunning diaorama of the stomp dance from Emily Thompson’s The Daughter of the Sun. (See traditional myth here.) My inner child wanted to play with this so badly.

All the author/illustrators did a wonderful job, and it was an honor to be a part of this project.

And now, believe it or not, we’re 10 days away from our departure for the UK. So much to do and no rest for the weary!