Alas, I’m behind on my postcards.

Quickie recap of our London anniversary trip:
— Thursday night we saw Matilda, which was all spectacle and flash and broad humor. My favorite parts were when Matilda told the story of the escapologist and the acrobat.
— Friday we saw Let the Right One In, which was quite spare by comparison, but I couldn’t stop thinking and talking about it afterward. You might have read the book or seen the Swedish film. (Or even the American film.) It’s certainly one of the most interesting vampire stories I’ve ever encountered, and the play’s use of Olafur Arnalds‘ songs was quite a bonus.
— Saturday night was a Baroque concert at St. Martin in the Fields, which featured a recorder player. I don’t think I’ve ever seen anyone play the recorder live, much less the sopranino recorder! That was fascinating.

Before the play on Friday we had afternoon tea at The Montagu, the restaurant at our hotel. Here’s the obligatory tiered tray shot: 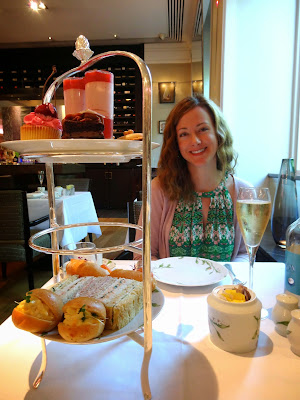 You may be asking, “where’s the best part — the SCONES?” The server brought them when we were finished with our sandwiches so we could enjoy them warm from the oven. And here’s a closer look at the china, if you’re interested in that sort of thing. 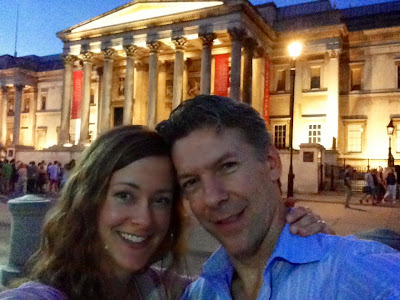 Selfie taken in front of the National Gallery after Saturday night’s concert. 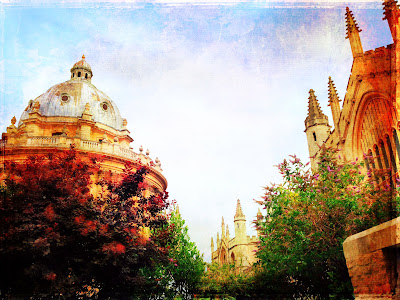 Finally, here’s an interesting postcard shot of my view when I met Amy Butler Greenfield for tea at the Vaults and Gardens cafe at St Mary’s this past Monday. That’s the Radcliffe Camera on the left (with its funny face) and All Souls College at the right. Such a lovely view for tea drinking and chatting!

This weekend it’s Lyme Regis, where I FINALLY get to walk the Cobb! Let’s hope I don’t fall off and bruise my skull like silly Louisa Musgrove. Mostly I’m just keen to see coastline. My brain has been buzzing with story ideas — you guys know how settings inspire me.