January has been a good month, for I finally seem to have dragged myself out of the COVID reading slump. I started the year with Kevin Wilson’s Nothing to See Here and devoured it in two days. I loved the Tennessee setting, the quirky characters, and the way this story tugged so firmly on my heartstrings. I particularly enjoyed the reviews from NPR and also The New York Times. (Many thanks to Kaz Mahoney for bringing this book to my attention.)

I turned to D.E. Stevenson next — she’s my top choice for comfort reading — and finished the Dering Family Series. Stevenson is always a cosy and gentle read, offering a little bit of romance, a little bit of drama, and lots of tea and long walks in the countryside.

Following Stevenson I was yearning for yet another comfort read and ultimately decided to try Elizabeth Goudge. I’ve dipped into a couple of her books in the past and somehow always got bogged down. But The Scent of Water (1963), about a woman leaving London for a life in the country, seemed a promising option.

The novel begins with the death of an old woman in her country home. Soon thereafter the woman’s much younger cousin and namesake, Mary Lindsay, arrives from London to take possession of the house she has inherited. I do love a “fish out of water” story, especially when it’s an urbanite acclimating to country life. As Mary tries to bring the old house up to quasi-modern standards, she meets kindred spirits, young and old, and learns a deep appreciation for the peace and sanctity of nature.

She opened her window in the morning and saw a spider’s web sparkling with light and was aware of miracle. Sitting in the conservatory with her sewing she knew suddenly that the sun was out behind the vine leaves and that she was enclosed within green-gold light as in a seashell. She dropped her sewing in her lap and was motionless for an hour while the light lay on her eyelids and her gratitude knew no bounds. Standing inside the willow tree she looked up and a thrush was there, so close to her that she could learn by heart the gleaming diapason of his breast, the sleek folding of the wing feathers, the piercing bright glance going through her like lightning. They were alone in the world, he and she, and presently he was alone and she was only a pair of eyes of which she was no longer aware. He did not fly away until some sound disturbed him, for the creatures were not afraid of her while she walked in light though they feared her in darkness. Once she held up her finger to a butterfly and it alighted there, and though it soon flew away again, her finger wore the sensation of airy lightness like a jewel until nightfall. She grudged herself to sleep on the moonlit nights, for she could not bear to lose a moment of the moon’s serene companionship. These and other greetings she recorded in her diary.

Elizabeth Goudge’s father was a professor of Divinity at Oxford, and I was aware that many (most?) of her books feature Christian themes. At one time this might have put me off. I suppose I’m still put off by didactic stories and/or smugly pious writers. This story, however, had a beautiful and gut-wrenching honesty that I found compelling. At times, Mary’s moments in nature have a mystical and transcendent quality.

I will read this book again. 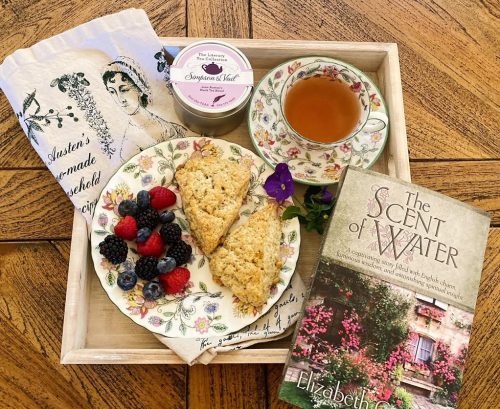 For tea, I chose Jane Austen’s Black Tea Blend from Simpson & Vail, a delicious combination of black teas, vanilla, spearmint, and lavender flowers. In the novel, Mary keeps a volume of Jane Austen by her bed and delights in the author’s “cheerful sanity,” as well as the fact that Austen lived in a house much like Mary’s “in a village hidden in a quiet fold of green and rural England,” so this tea seemed a good match. To pair with it I made lavender and white chocolate scones from Iveta. As always, Iveta scones are easy to make and so yummy to eat.

Keep in mind that you can see previous “Tea and a Book” recommendations by clicking the tag at the upper right, or below if you are on your phone. 🙂