The autobiography of a reader

Thank goodness for the Brontë Blog — it keeps me informed of all sorts of lovely Brontë-related things, including this book recently released in the UK: 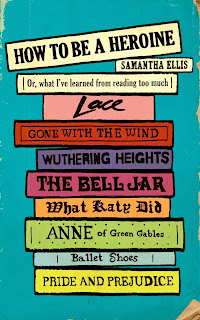 How to be a Heroine: or What I learned from Reading Too Much
On a pilgrimage to Wuthering Heights, Samantha Ellis found herself arguing with her best friend about which heroine was best: Jane Eyre or Cathy Earnshaw. She was all for wild, passionate Cathy; but her friend found Cathy silly, a snob, while courageous Jane makes her own way.

So she decided to look again at her heroines – the girls, women, books that had shaped her ideas of the world and how to live. Some of them stood up to the scrutiny (she will always love Lizzy Bennet); some of them most decidedly did not (turns out Katy Carr from What Katy Did isn’t a carefree rebel, she’s a drip). There were revelations (the real heroine of Gone with the Wind? It’s Melanie), joyous reunions (Anne of Green Gables), poignant memories (Sylvia Plath) and tearful goodbyes (Lucy Honeychurch). And then there was Jilly Cooper…

How To Be A Heroine is Samantha’s funny, touching, inspiring exploration of the role of heroines, and our favourite books, in all our lives – and how they change over time, for better or worse, just as we do.

Sounds great, right? Here’s a positive review from The Telegraph for your consideration, too. I hope this book will be available in the U.S. soon! (Oh, and Danielle kindly pointed me to a dicussion with Samantha Ellis on BBC’s “Open Book” — you should be able to listen through iTunes. Starts around 16:00 — very jolly!)

I do love the idea of tracking one’s development through the books one has read and re-read. (What would be a good term for this?) It brought to mind another book, Erin Blakemore’s The Heroines’s Bookshelf: Life Lessons, from Jane Austen to Laura Ingalls Wilder, which I recommend. Also, there’s Laura Miller’s The Magician’s Book: A Skeptic’s Adventures in Narnia, which I found to be a fascinating memoir/contextual study of C.S. Lewis’ Narnia books, though I don’t share Miller’s depth of disillusionment.

Can you think of other memoirs centered favorite books? I feel like there should be multiple titles springing to mind, but . . . no.

If you were to write a reading memoir, which books would you HAVE to include? I blogged about this once in terms of which authors I “blame” for my being a writer, but here’s a longer (though surely incomplete) list:

Bread and Jam for Frances, by Russell Hoban
Knight’s Castle, by Edward Eager
The Lion, the Witch, and the Wardrobe, by C.S. Lewis
All the Laura Ingalls Wilder books
The Secret Garden, by Frances Hodgson Burnett
Mists of Avalon, by Marion Zimmer Bradley
Little Women, by Louisa May Alcott
Anne of Green Gables, by Lucy Maud Montgomery
Jane Eyre, by Charlotte Brontë
Pride and Prejudice, by Jane Austen
Song of Solomon, by Toni Morrison
Middlemarch, by George Eliot
Gaudy Night, by Dorothy Sayers
Possession, by A.S. Byatt
Ragtime, by E.L. Doctorow
I Capture the Castle, by Dodie Smith
The House on Mango Street, by Sandra Cisneros