My last blog post (written THREE MONTHS ago, yikes) was about Emily Dickinson, and today–once again–it is Miss Emily who inspires me. 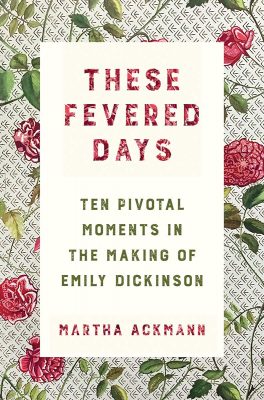 From the publisher: An engaging, intimate portrait of Emily Dickinson, one of America’s greatest and most-mythologized poets, that sheds new light on her groundbreaking poetry.

From The New Yorker: The Emily Dickinson who emerges in this vivid, affectionate chronicle is a complex and warm-blooded individual—as curious, defiant of convention, and passionate in life as in her poems.

I found These Fevered Days a very accessible and detailed presentation of key moments in Emily Dickinson’s development as a writer. The final chapter brought me to tears. If you are curious but can’t read the book just yet, do listen to this podcast interview with the author on CBC radio’s Writers and Company: The poet of solitude: How Emily Dickinson was fueled by the light of her brilliant interior world. (Many thanks to Danielle for alerting me to its existence!) 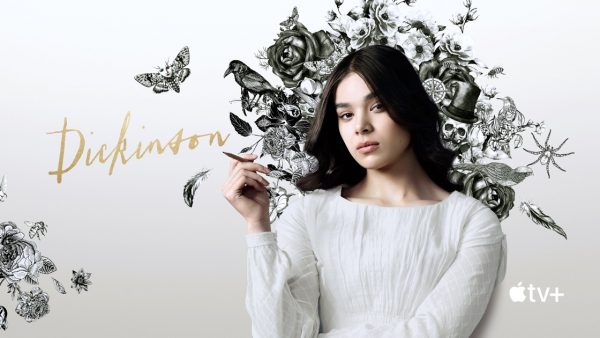 A dear friend recommended this show to me (thanks Angie!), and I confess I was skeptical at first. Modern language and music? Drug use and profanity? Brief and sometimes random scenes of sexuality? It’s NOT the familiar tale of a repressed and reclusive poet who scribbles in secrecy. This Emily is fierce and defiant, except in those moments when she’s terribly vulnerable. The writers clearly know a great deal about Emily Dickinson’s life and 19th century American culture, so anachronisms are utilized strategically and, in my opinion, effectively.

Online Reviews:
—The Verge: Dickinson is the wildest, weirdest, and most earnest show on Apple TV Plus

—The New Yorker: Dickinson from Apple TV Plus is Deeply Weird and Dazzles Gradually

—Vulture: All Hail Dickinson, a TV Show Made Specifically for Literary Weirdos

(Hmmm…do you see a theme emerging?)

There are negative reactions from humorless old fogies other reviewers, of course. The show is irreverent and downright bizarre at times, but Emily’s bittersweet epiphanies seem to temper the outrageous humor. Haven’t we all wished we could be that person who knew herself so well, who refused to compromise, and who didn’t worry about–in fact, embraced the notion of–going against the grain? We hesitate to be that person because we know the emotional and social costs. That’s one of the glories of Dickinson — we see her go there, defiantly and, at times, foolishly. She gets knocked down time and again, but she never gives up. (Hailee Steinfeld, who is wonderful as Emily, is also an executive producer of the show.)

I can’t stop thinking about this show, you guys. There’s even a scene where Emily stitches THE FASCICLES! (Verily, I did swoon.) 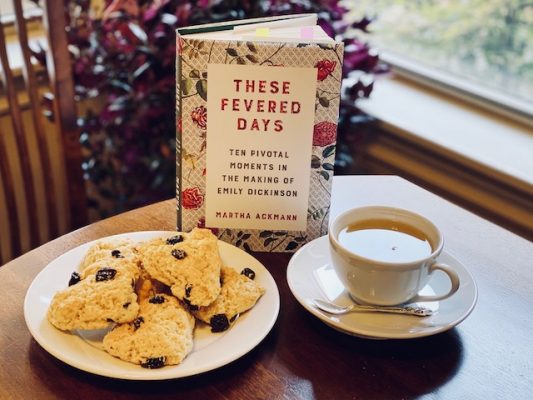 OF COURSE I made tea to celebrate finishing both the book and the first season of the TV series. The Emily Dickinson tea from Simpson & Vail, featured in my previous post, is a delicate blend of jasmine and rose petals recommended for those days in which you wish to dwell in possibility. The Cherry Scones were made from the EASIEST mix in the world–in fact, Emily Dickinson would probably be ashamed of you for using it–but they are so tasty and quick! See all of Iveta’s offerings here. (Folks with gluten or dairy intolerance may wish to try something different.)