My second ghostly recommendation from Scorsese’s 11 Scariest Horror Movies of All Time is The Uninvited, based on a novel by Dorothy Macardie, featuring a screenplay by Dodie Smith (I Capture the Castle! 101 Dalmations!) and Frank Partos.

What Scorsese has to say:
Another, more benign haunted house picture, set in England, no less atmospheric than The Haunting [which I will feature later] — the tone is very delicate, and the sense of fear is woven into the setting, the gentility of the characters. 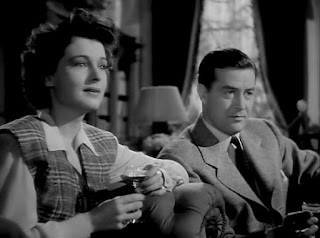 The basic plot: during a getaway to the coast, a brother and sister (played by Ray Milland and Ruth Hussey) come across a gorgeous mansion overlooking the sea. They decide to pool their meager resources to buy it. As brothers and sisters often do. No, really! It’s charming.

(As I’ve been reminded by the more sensible forum posters on imdb.com, in that time an unmarried sister would keep house for her bachelor brother, so I shouldn’t tease.) 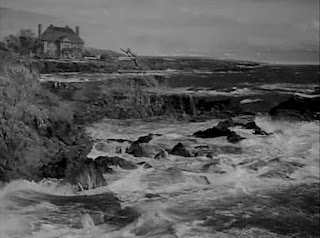 Isn’t the house beautiful? Or is that just a model? Sadly, The Uninvited was filmed in California rather than England, and most of the actors are American, but you’ll still be swept up in the mystery. Something isn’t quite right with the house, you see. The animals run away. Disturbing sounds and cold spots trouble the new owners, and the maid is threatening to leave. The pretty girl down the street, who happened to grow up in the house, tries to leap off the cliff when she visits. What can be done? 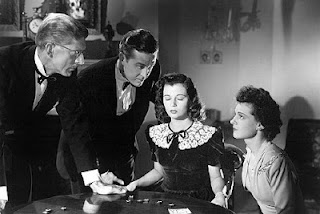 Have a séance, of course!

After a slow start (during which an awkward romance develops between the brother and the cliff-leaping girl–their scenes are guaranteed to make you giggle), things start to get truly creepy. There’s at least one jump-in-your-seat moment, and the special effects are surprisingly effective. The Uninvited is a great film for an October evening by the fire — if you can find a copy. I had to buy the VHS tape, but there are rumors of a DVD release in the near future. Or perhaps you can find it on TCM?