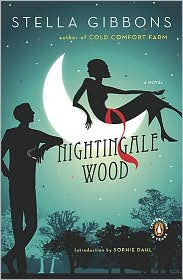 Lately I’ve been searching out novels written/set during the 1930s — mostly because I’ve been playing around with a story idea set in that time. I’ve long been a big fan of Cold Comfort Farm (which may actually be set in the 20s?), so I decided to go about finding more novels by Stella Gibbons. Nightingale Wood, published in 1938, seemed a promising candidate.

I must admit it started out a bit slow. It meandered here and there, throwing some rather jarring POV shifts at me along the way, and the characters were not exactly likeable. Still, I giggled at the satiric elements and decided to stick with it. Lo and behold, the drippy, depressive characters began to do unexpected things and thereby grew and changed. (Well, not all of them changed, but at the very least they finally figured out what they really wanted.) By the time I was halfway through the book I could not put it down, and I found the ending wholly satisfying. (I believe I did, in fact, hug the book.) This riff on the Cinderella story is surprisingly modern for 1938 and, though perhaps not quite as funny as CCF, the humor is delightfully biting. I highly recommend it. In fact, I really wish someone would make a mini-series out of it. (Hear that, BBC and ITV?) A little compression would serve the story well, and what gorgeous fun such an adaptation would be!

Anyone have recs for other books published/set during the 30s? Should I try Angela Thirkell?

On a related note, I was very tickled when Gibbons did some literary name-dropping — Mr Spurrey, who is “lonely as only a crashing bore can be” nevertheless proves himself quite lovable in this passage:

Mr Spurrey, too, was content. The sun was shining (Mr Spurrey liked sunshine), there was blue sky, the Rolls was running well, and at home he had Dorothy Sayers’s latest story waiting unopened. He would read it that evening, over a decanter.

[By the way, I was excited to learn today that the Lord Peter Wimsey Companion is now available online to members of the Dorothy L. Sayers Society. Huzzah! Maybe it’s time to give Five Red Herrings another try, now that I have this resource available to me.]