Preliminary note #1: Apparently, I can’t add. This is why I write books instead of being an accountant. Last week was actually five weeks until the release of The Revenant. I will endeavor to keep my figures straight from here on out!

Preliminary note #2: Before we get to this week’s theme, I must announce the winner of Tessa Gratton’s BLOOD MAGIC, as selected by Random.org. That lucky person is Jynn Morgan, who won by entering on Livejournal. Huzzah!

NOTE: The rest who entered are still in the running for the two finished copies of The Revenant — these winners will be announced on the book’s release date. FYI – if you comment on each week’s post, that’s five entries!

Now, without further ado . . . This week’s theme is the Victorian period!

What do I love about it?

D.L. King asked me about this recently, and I had some trouble answering — even though the Victorians idealized everything feminine, female empowerment outside of the domestic sphere was not much promoted. Still (and I’m cribbing my own response to D.L. here), there were women who worked around the rules, such as those who published novels, were professional artists or photographers, or who fought for educational reform and women’s suffrage. I’m particularly drawn to stories of Victorian ladies who flouted convention in small but effective ways, pursuing their passions without thoroughly forfeiting their social standing.

On a lighter note, I confess to loving the elaborate and often mystifying rules of social ettiquette in the Victorian period. Even the prudishness is interesting to me! The restrictions on physical intimacy between ladies and gentlemen work particularly well for romantic stories — in this setting a mere kiss on the inside of a wrist becomes a transgressive and potentially swoon-worthy event. You gotta love that! 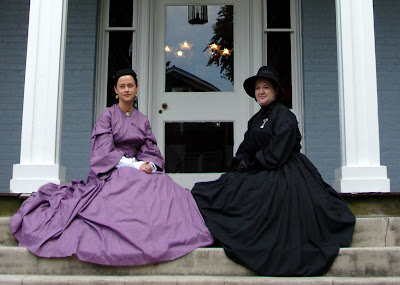 And the clothes! I’m so obsessed that I even joined my bestie Michelle Lunsford in dressing up for the Athenaeum Girls’ School — a summer program in which teen girls learn about young ladyhood in 1861 Columbia, Tennessee. Michelle teaches courses on the rituals of mourning (note her full mourning gear above) and afternoon tea. 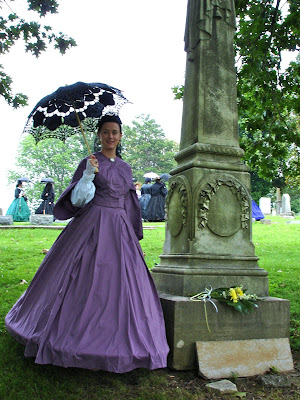 There’s something so seductively refined about negotiating the events of the day in a corset and hoop. It’s almost as though the wide skirt creates a forcefield of awesome around your body — you are literally untouchable in your elegance!

What does it have to do with The Revenant?

The novel is set in 1896 Indian Territory (what is now eastern Oklahoma), and though this may seem a far cry from Victorian England, the ladies of the Cherokee Female Seminary endeavored to embody the ideals of Victorian womanhood. 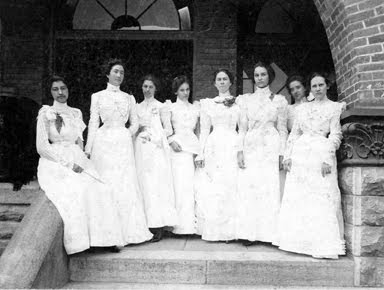 The Cherokee founders of the school envisioned the students having the same values and opportunities as wealthy students in east coast boarding schools. (The Cherokee Female Seminary was modeled after Mount Holyoke Female Seminary, after all.) Some scholars argue that when the school began to admit charity students from poorer homes, tension arose between the wealthy “progressive” students and their more “traditional” counterparts who weren’t necessarily reared to emulate the Victorian ideal of womanhood. This tension became part of the conflict in The Revenant.

What am I giving away? Dark and luxurious with rich, compelling characters and a perfect blend of the mysterious and the fantastic, Saundra Mitchell’s THE VESPERTINE is Victorian gothic at its finest—at once evoking the lyricism of Bronte, the heart-pounding of Poe and a vivid, enticing voice that is entirely her own.

So sayeth Sarah MacLean, Author of The Season and 9 Rules to Break When Romancing a Rake, and I agree with every word of her praise. The Vespertine haunted me so much that I’ve already given one copy away, and now it seems the perfect fit for my Victorian giveaway! This story of a girl who experiences prophetic visions at twilight is so gorgeously written and lushly atmospheric that any fan of the Victorian period is sure to enjoy it. For more about The Vespertine, please see my review of the book at Book End Babes and my interview with Saundra here at my blog. The winner will receive the book, a matching bookmark and a signed bookplate, along with an assortment of Revenant and Elevensies swag.

The weekly giveaways are open to residents of North America only. International readers may still comment to enter the drawing for a finished copy of The Revenant.

How does one enter?

1. Leave a comment that includes a name and some way to contact you. This is really all you have to do to be entered for the weekly giveaway AND to put your name in the drawing for one of two finished copies of The Revenant. (Of course, I’d love for you to expound on your favorite things about the Victorian era in your comment, but this is not required.)

2. If you’d like an extra entry, please tweet a link to this contest. Something like: Win a copy of THE VESPERTINE at @soniagensler’s Four Weeks to THE REVENANT Giveaway! http://tinyurl.com/3rpcopz