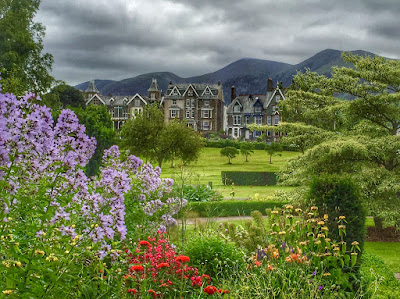 Catching up on postcards today with some shots from our July 16-19 trip!

Before I talk about the photos, I should mention that we first went to the Lake District many years ago — to Bowness, in fact, near Windermere — and it was one of the HOTTEST weekends I’ve ever experienced in England. This was in the days before smart phones with weather apps, so I packed for cool weather. Argh! It was so sunny that at one point my arms broke out in a heat rash and I felt quite ill. The nights, as you might imagine, were miserably sticky and hot.

THIS visit, to the northern part of the district, was much more to my liking. The skies were gloomy (but nicely dramatic in photographs) and the air was damp and cool. Rain was forecast for the entire weekend, but aside from a few minor sprinkles we only saw it the mornings before breakfast. For me it was perfect hiking weather, and we ended up covering a lot of territory!

Now for the photos — above you see a shot of Keswick from Hope Park. Steve and I were both so impressed with the town. Certainly there were lots of tourists around, but the place did not feel the least bit overcrowded. Keswick is bigger than I would have predicted — you’ll find just about everything you could ever need — and yet it manages to stay quaint and charming. 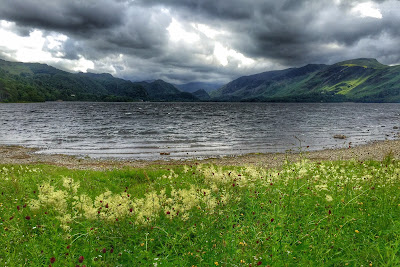 On Friday we decided to walk the perimeter of Derwentwater, which we’d been told was around 13 miles. No problem! It took a good portion of the day, especially because we stopped often and took afternoon tea at a hotel on the opposite side of the lake. I love this shot of the northeast side of the lake with gloomy sky above and Meadowsweet below. 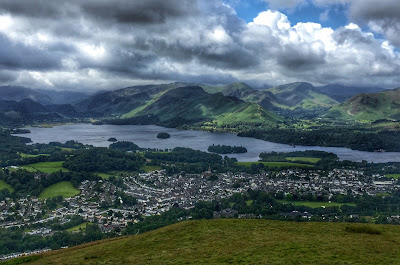 Saturday morning we hiked to the top of Latrigg Fell, which offers gorgeous views of Keswick and the lake. 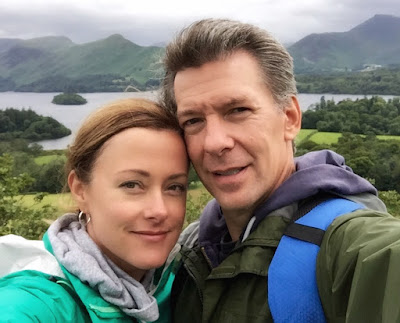 Then later that day we walked up to the top of Castlehead Wood and took a selfie, ha!

I have many more photos at my Lake District Flickr Album — I hope you’ll take a look!