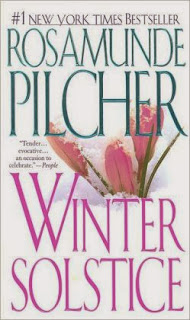 For this month’s post, I was determined to find a novel in which most of the story takes place during Christmas. I read several good candidates, but Winter Solstice was by far the most compelling. The story revolves around Elfrida Phipps, a former stage actress who has retired to a small cottage in Hampshire, England. There she meets the Blundell family, and is particularly drawn — in a friendly way — to Oscar Blundell, who married late in life and has a young daughter. When tragedy strikes (I don’t want to spoil too much), Elfrida agrees to accompany Oscar to his childhood home in Scotland, so that he can avoid the festivities of Christmas and mourn in private. The house becomes a refuge of sorts, as more people from Elfrida’s life arrive to escape their troubles and be healed by her nurturing attention.

This book is wonderfully cozy, and I hardly know how to express how much I loved Elfrida, so I’ll just keep it general and brief. If you are fond of cozy domestic dramas that meander pleasantly, in which character trumps plot and the predictable outcome makes you grin from ear to ear, you’ll love this book. If you like English and Scottish villages, happy dogs, lively chats, and lots of tea drinking, you’ll certainly enjoy Winter Solstice!

“You’re Lucy, aren’t you? Mrs. Phipps told me about you. What do you think of your room? We ‘ad a lovely time doing it all up for you. It was just an empty old attic before.”

“Have a cup of tea, Mrs. Snead,” said Elfrida, and Mrs. Snead said that would be very nice, and proceeded to make herself a mug, with a tea-bag, and then settled down at the table to drink it.

Lucy knew that Gran would disapprove violently of such familiar carryings-on, and, perversely, liked Mrs. Snead all the more. (231) 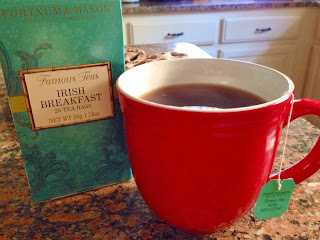 In honor of Mrs. Snead, and the casual, cozy nature of tea in Elfrida’s household, I decided to have a mug and tea-bag myself. Elfrida often makes reference to “builder’s tea” (strong, inexpensive tea brewed in a mug, with lots of milk and sugar), so I chose a bracing cup of Irish Breakfast. It’s a mite too posh, having come from Fortnum & Mason, but it’ll do. 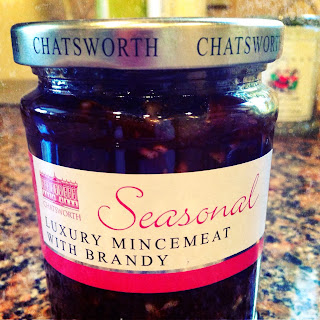 And since it’s Christmas time in the story, there are many mentions of mince pies. With that in mind, I bought a jar of mince meat and set about making my own! Now, a word on mince meat: apparently the pies used to be made with meat and suet along with the fruits and spices–a Middle Eastern-inspired combination of sweet and savory. But these days the pies you find at shops and cafes are usually just sweet, and that’s how I like them! Read more about mince pies here. 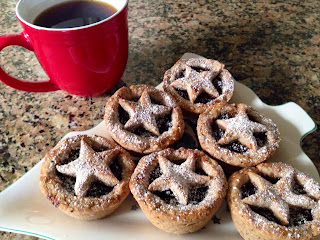 Using this recipe, I made my own crust and ended up with a rather rustic-looking batch of pies. The recipe is supposed to make 18 mini pies, but I didn’t understand how the dough was to be pressed into the pan, so perhaps my crusts are thicker than the recipe intended. But I’m glad I did it, because the pies are delicious. 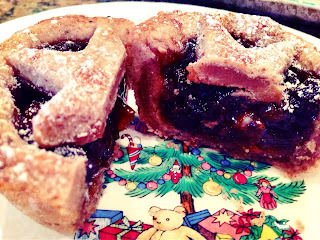