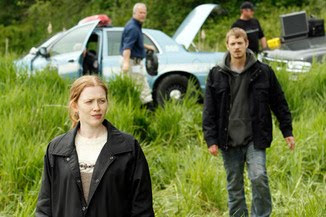 Sometimes I get tired of police procedurals that follow the typical script. Detectives: 1) arrive at scene of crime, 2) interview wise-cracking forensics expert, 3) interview suspects, 4) fixate upon red herrings, 5) finally get a clue. In a 1-2 hour episode, this formula doesn’t allow for character development in all the individuals connected to the crime. That’s why I love shows that pursue an investigation over the course of an entire season (like The Wire, for instance). And that’s the kind of show AMC’s The Killing is turning out to be.

Three episodes in and I’m pretty much hooked. Sarah Linden, our reluctant investigator, is interesting to watch, but I’m more intrigued by her newly-assigned-to-Homicide partner, Stephen Holder (played by a fairly established Swedish actor — I never would’ve guessed). His narcotics background certainly makes for interesting interview scenes! Billy Campbell (as Councilman Richmond) is always fun to watch, too. The man is simply too good looking to trust — Richmond seems perfect for the villain — but then Campbell pulls off these moments of honesty and vulnerability that make my heart melt a little. And finally, there are Rosie’s parents. The Larsens’ grief is raw and painful to witness, and yet they are so sympathetic that I’m not quite sure if I can trust them. They’ve got to have a secret or two that’s yet to surface.

The show, adapted from a popular Danish TV series, has managed to maintain a certain Scandanavian bleakness in its new Seattle setting.

Who else is watching? Which characters intrigue you the most?