In earlier TV Tuesday posts, I expressed excitement over the premieres of Game of Thrones, Camelot, The Killing, and So You Think You Can Dance.

I’ll say right now that So You Think You Can Dance, though still early in its season, is proving to be WONDERFUL entertainment, as usual. (I quite like the tweaks they made since last year.)

Check out Melanie and Marko and you’ll see what I mean.

Camelot — I gave up on this one after a few episodes. I love Eva Green to pieces, but she couldn’t save this show. For the most part, I found it contrived and boring. After four episodes I started ff-ing through the tedious bits. When I realized I was forwarding through entire episodes, I decided it was time to call it quits.

The Killing — This started so strong! By episode five, however, the mystery was losing momentum, and I still wasn’t connecting to the female detective. (Wasn’t really connecting to anyone, actually.) I pushed through episode 8 (which had NOTHING to do with the mystery, if I remember correctly), and then saw the outrage over the show’s finale. At this point I think I’ll delete the last two eps and move on to something else.

Game of Thrones — after a very disturbing premiere episode, this show grabbed hold of me and wouldn’t let go. Yes, there’s violence and sex galore. Women & children are constantly in peril. But . . . so are the men! No one is secure. By episode 10, many of the most powerful men in the show are GONE. What I found so compelling about this show is that at its center is a family of loyal, loving and honorable people who are fierce in their attempts to protect — or avenge — each other. The Starks are easy to root for.

And then there’s this character: 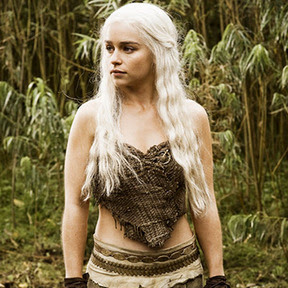 Daenarys Targaryen (played by the amazing Emilia Clarke) closed out the season with a scene that had my heart pounding and tears streaming. I can’t stop thinking about her. What an amazing character arc!

Those of you who were put off by the first ep might find this interesting: EW’s Jennifer Armstrong asks Game of Thrones: Feminist or not? (Originally posted in April.)