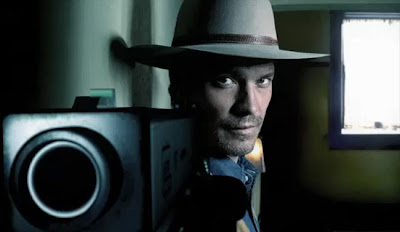 I think it was during a NECRWA session entitled “Rule #87: Watch NCIS for a Master Class in Creating Characters” that someone mentioned the FX show JUSTIFIED in glowing terms. It brought to mind a very positive review from Entertainment Weekly that I’d read long ago. The review intrigued me, but at that time I just wasn’t ready to jump on a show about a U.S. Marshall, even if it was based on characters and storylines created by Elmore Leonard. (I’ve always liked what Leonard has to say about writing.)

After the session, Kim Harrington mentioned that her mom was obsessed with JUSTIFIED and its star, Timothy Olyphant. That finally tipped the scales of my indecision — I bought a couple of eps from iTunes to watch on the long plane ride from Boston to DFW.

I was hooked after the pilot.

What kept me from watching in the first place was this idea of a cowboy as a main character. Why did I think this would be a problem? I love strong, stoic men who use their words sparingly. Men who hide their man pain and anger behind dry humor and wry smiles. (Those of you who know me well are nodding — in books/film/TV I never go for the blabby, idealistic ones who talk about feelings. I want the sarcastic and emotionally repressed guys who’d rather talk with their fists!)

Okay, back to the point – Turns out, Timothy Olyphant’s Raylan Givens is exactly my type. He’s all of the above, but also has a certain gentlemanly quality that is incredibly appealing. (In a strange way, he reminds me of Ben Fraser from Due South. Not quite so adorably nerdy, but there’s the same quiet strength, attention to detail, gentlemanly manner, and, of course, the hat and boots.)

The villains on this show are captivating, too. No need for mustache twirling — many of these guys are downright psychopaths, but at the same time they’re extremely clever, charming and often sympathetic in their moments of vulnerability. Or they’re just clever enough to get themselves in bigger trouble than they could have imagined, and it’s fun to watch them self-destruct.

I’m not terribly interested in the current “love interest” (after four eps), but I won’t complain too much when Raylan can’t keep himself away from the woman he’s been ordered not to mess with. 🙂