New fall shows are getting ready to air. Old favorites are returning. Seems like it’s taken FOREVER, doesn’t it?

I haven’t suffered too much. For the last couple of weeks I’ve been watching a couple of DVD sets of British shows from the 90s. 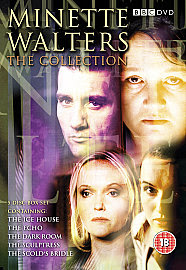 The Minette Walters Collection was my first purchase after getting my all-region DVD player. I’d seen all these episodes long ago on TV, but was surprised to learn that the US broadcasts were edited for length and content. With these DVDs you get the Full Monty! (And I’m almost being literal on that.)

I was a huge Minette Walters fan in the 90s. I read each of these books when they came out and found them utterly gripping. The TV adaptations are fascinating, too. They were my introduction to (now outrageously famous) actors like Daniel Craig and Clive Owen. The characters were dark and complex. The mysteries were convoluted, and their solutions were nearly impossible to predict.

I still enjoyed the episodes during this recent viewing, but there was some squirming. For one thing, nearly every police officer depicted in these eps is disconcertingly homophobic. (They’re usually the bad guys, though.) Many of the male characters are too sexually aggressive for my comfort. There’s a high degree of dysfunction all around. If you have a tolerance for that, you might enjoy the dvds (or the books, for that matter).

(Of all the eps in this collection, only “The Sculptress” is available from Netflix/Qwikster.) 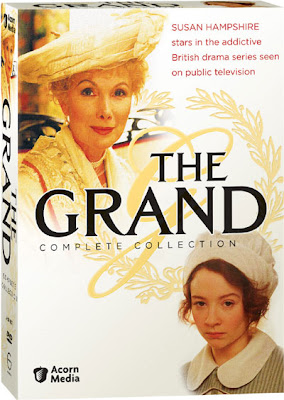 My dad recommended The Grand to me. (Now that he’s mostly retired, he watches all sorts of recommendable dvds.) What I didn’t realize was that it was written by Russell T. Davies. Who knew that he’d penned a historical melodrama? (Well . . there was Casanova.)

Since I’ve only just started this series, I’ll share the Amazon blurb:

Lust, greed, and gossip in a glamorous British hotel of the 1920s. As the most opulent hotel in Manchester, England, during the decadent Roaring ’20s, The Grand is more than a building. It’s a nexus for schemes, scandals, romance, and intrigue. For owner John Bannerman, The Grand symbolizes a tradition of luxury and elegance begun by his father. For Marcus Bannerman, it becomes a risky investment and a way to entice his brother’s wife into bed. And for the maids and porters employed there, it represents a possible escape from their hardscrabble past–and an endless source of backstairs gossip.

Very mixed reviews on Amazon, but after four episodes I’m still enjoying it. It’s rather fun to watch Stephen Moyer in his pre-True Blood days.

(This series is available from Netflix/Qwikster.)

Now that I have this all-region player, I’m itching to watch some UK shows that aren’t available in the US. Any recommendations? Has anyone seen Marchlands?