The NEXT BIG THING blog

I’ve been watching this meme go around, thinking it would be fun to do, but deadlines and commitments kept me from joining in. Recently, however, my friend Doug Solter tagged me again (here’s his entry), and this time I couldn’t refuse. It’s always fun to talk about your newly birthed (or still gestating) fiction baby, right? So here goes . . .

What is the working official title of your book?
The Dark Between

Where did the idea come from for the book?

The idea came to me when I was researching Spiritualism for my first book, The Revenant. Somehow (I think it was through Barnes & Noble’s analytics, bless them), I came across a book titled Ghost Hunters: William James and the Search for Scientific Proof of Life After Death. To me, this non-fiction book written by Pulitzer Prize-winning journalist Deborah Blum read like a suspense novel. The main “characters”– all founding members of the Society for Psychical Research — were so briliant and tormented, so vividly and relatably human, that I grew to care deeply for them. Their narratives unfolded like a film in my mind, and I could easily envision an HBO series featuring their attempts to scientifically prove the reality of paranormal phenomena, along with the ups and downs of their turbulent personal lives. I really wanted to write a story set within this world, but it took me a while to find my own characters and conflicts.

What genre does your book come under?
I would say . . . Young Adult paranormal mystery.

Which actors would you choose to play your characters in a movie rendition?
Ha ha! When I was planning this story (back in 2009?), I made a collage, which ordinarily is not my sort of thing AT ALL. I’ve always been a big fan of outlining and free-writing to flesh out a story, but I decided it would be a good change of pace to work with images instead of text. This is what I came up with for The Dark Between (click to enlarge): 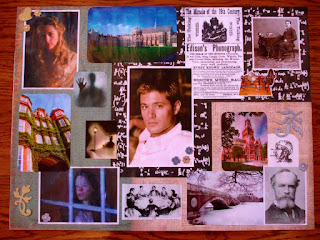 First off, I have to say that all the images looked great…until I Mod Podged them. After that the poor collage looked like I’d left it out in the rain. Secondly, although I was at one point flirting with the idea of including some sort of EVP recording device, there’s no phonograph in the story.

Now…actors. You can see that I chose an early photo of Jensen Ackles for Asher Beale, mostly because of his lovely freckles. (Or “frackles” as I’m told they’re termed within Supernatural fandom.) (And yes, I googled “American actors with freckles” to find this photo.) For Elsie, a beauty with a dark secret, I chose the seductive yet vulnerable Scarlett Johanson in The Prestige. And for Kate, I chose a photo of Irish actress Elaine Cassidy from her performance as Maud in Fingersmith. (She looks particularly smeared from the Mod Podge, but it actually suits Kate’s state of mind at the beginning of the book.)

All these actors were too old to play the parts when I made this collage, and that was years ago. Still, their faces inspired me.

What is the one-sentence synopsis of your book?
(I’m stealing this from the inside cover of the ARC. I guess it’s the Library of Congress summary?

Three teenagers in Victorian era London spend the summer at a local college and soon discover that their hosts, the Metaphysical Society, may be conducting sinister experiments in an attempt to communicate with the dead.

There are some inaccuracies (it’s actually set in Cambridge in the early Edwardian period) and oversimplifications, but this does convey the flavor of the book.

Is your book self-published, published by an independent publisher, or represented by an agency?
It will be published by Alfred A. Knopf/Random House on August 27, 2013.

How long did it take you to write the first draft of your manuscript?
Under a year, I think.

What other books would you compare this story to within your genre?
Here’s what my publisher has to say about it: “A supernatural romance about the powers that lie in the shadows of the mind, perfect for fans of Sarah Rees Brennan, Alyxandra Harvey, and Libba Bray.”

Who or what inspired you to write this book?

As mentioned above, it was the founders of the Society for Psychical Research, as described in Blum’s book Ghost Hunters, who inpsired the characters and situations in The Dark Between. I was intrigued by this group of extremely well-educated, thoughtful, and rational (for the most part) men and women who wished to make a serious study of paranormal phenomena. But I didn’t really want to write about the adults. I wanted to imagine what it might have been like for their children, especially if these children were shocked or ashamed by their parents’ activities, and particularly if one of them had been suppressing a paranormal ability for much of her life.

Thanks again to Doug for inviting me to participate! Two of my critique partners, Brandi Barnett and Dee Dee Chumley, will be joining me in blogging “the next big thing” next Friday, February 15. Be sure to tune in!

← Previous post: Another reading resolution...& tangentially-related swooning Next post: Love is in the air . . . and in my books, and on my TV! →