Over the last several months I re-read (or in some cases read for the first time) Agatha Christie’s novels and short stories featuring Miss Jane Marple. What a delight! In addition I introduced myself to the Joan Hickson TV adaptations (most excellent) and revisited nearly all of the Geraldine McEwan and Julia Mckenzie versions that were canon Miss Marple. Might you indulge me as I share a few favorites?

Favorite book: I keep changing my mind on this one, but at the moment I think it might be A Pocket Full of Rye. Miss Marple has a very personal stake in this one as her former maid Gladys is involved. The pacing is good and the misdirection effective, and I enjoyed the chemistry between Marple and Inspector Peele. That said, I’d also put The Moving Finger, 4:50 from Paddington, and Sleeping Murder close to the top. The beginning of At Bertram’s Hotel is so charming (and I will revisit it even though the mystery itself is rather “meh”), and I quite enjoyed Nemesis for its window into Marple’s sleuthing process.

Favorite short story: The Thirteen Problems was an entertaining story collection and I was pleasantly surprised to find so much Gothic goodness running throughout. The most Gothic of all was “The Idol House of Astarte,” a country house mystery involving a fancy dress party that ends with a deadly accident. Or was it murder? I wish this one could somehow be adapted to television!

Favorite TV adaptation: While the Joan Hickson versions are excellent and much truer to the original texts, I have to admit that my favorite of all the individual adaptations was the Geraldine McEwan version of The Moving Finger. One might say it takes liberties with its blatantly Noir setup and the hero’s PTSD angst, but it also gives more agency to the love interest and effectively reimagines that troubling “makeover” scene. It’s a delightfully cheeky adaptation, and James D’Arcy and Emilia Fox have great chemistry as the Burton siblings.

Favorite Miss Marple quote: “I like living myself — not just being happy and enjoying myself and having a good time. I mean living — waking up and feeling all over me, that I’m there — ticking over.” (from A Murder is Announced).

[My favorite non-Marple quote might be Gina’s description of Stonygates in They Do It With Mirrors: “It’s pretty ghastly, really. A sort of Gothic monstrosity. What Steve calls Best Victorian Lavatory period.”]

And now for tea!

After all the time I spent with Miss Marple, I felt she deserved a celebratory afternoon tea out on the town. Las Vegas actually has several options for proper tea, and for this occasion my husband and I tried the offerings at Rí Rá Irish Pub in Mandalay Bay.

[Did Miss Marple ever take tea at an Irish pub? Probably not. But I certainly can imagine her nephew Raymond coaxing her into a local pub for tea just so he could study the “local color” for one of his novels.] 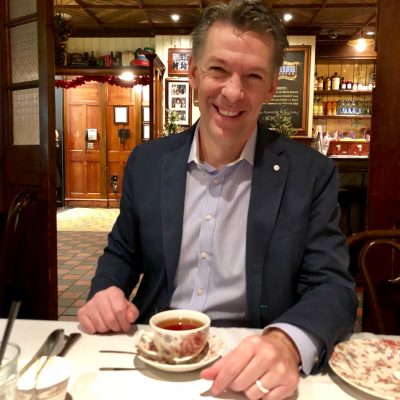 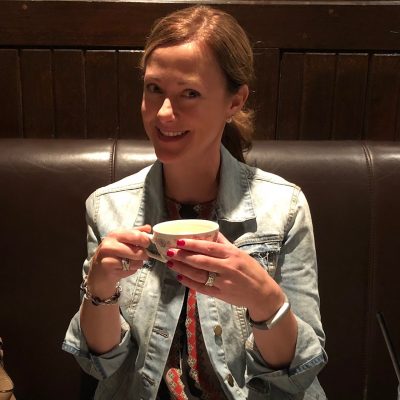 We found Rí Rá very charming. The server placed us in a comfy little nook near the entrance of the pub — does one call this a “snug”? — and we were fortunate to have it all to ourselves. 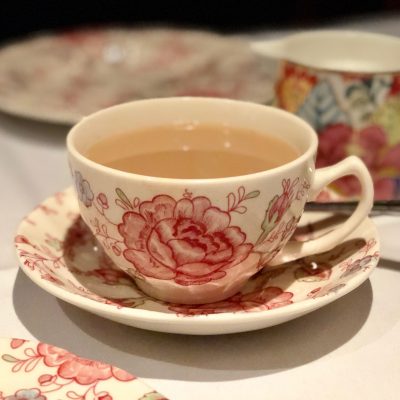 Here is a closer look at the cozy china pattern. We both chose the Organic Assam tea, which was perfectly steeped and delicious. 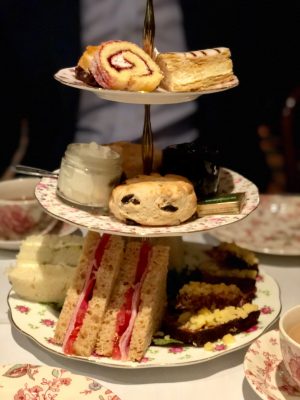 And here you see the tea tray, featuring sandwiches (ham & tomato, egg mayo, cheddar with Ballymaloe relish, cucumber & creme fraiche), raisin scones with cream and black current jam, and a selection of “decadent desserts.” It was the perfect amount for two — we ate almost all of it and didn’t feel too stuffed. (It helped that we took a long walk through the Luxor to Excalibur and back before returning to our car.) I do think Miss Marple would have approved!

Do you have a favorite Marple novel, story, or TV adaptation? If so please share in the comments!