Charlotte Bronte’s 200th birthday last year inspired me to re-read Jane Eyre, and I decided to make this part of my Read Harder Challenge by watching two film adaptations for comparison to the original text. I’d been meaning to re-watch the 2006 BBC version with Toby Stephens and Ruth Wilson, and I’m always eager to watch the 2011 theatrical version with Michael Fassbender and Mia Wasikowska. What a pleasure to read the book*, watch both adaptations and compare! It also was great fun to pair the book with tea and a sweet treat, as you’ll see below.

(*Actually, I alternated between reading the e-book and listening to Thandie Newton’s spectacular audio performance.) 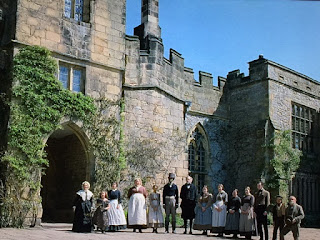 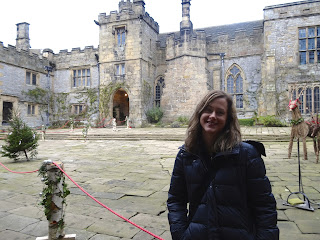 I’d forgotten that both the 2006 and 2011 adaptations were filmed at Haddon Hall in Derbyshire (as was the 1996 Franco Zeffirelli version with William Hurt and Charlotte Gainsbourg!). I’ve visited Haddon Hall in both the summer and at Christmas time, and it’s one of my favorite old piles in all of England. It seems perfect for Thornfield Hall–castellated and gloomy in a Gothically romantic way, also boasting a rushing stream and lovely terraced gardens. The 2006 version makes a little more use of the Haddon Hall interiors, whereas the 2011 version uses Broughton Castle (another lovely place to visit!) for many of the interior shots. 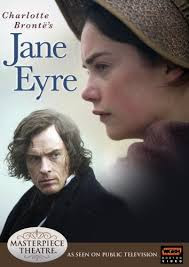 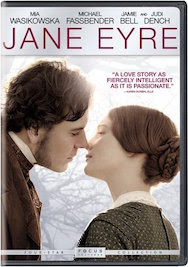 So, which adaptation did I like better? The 2011 adaptation will always be my favorite, but the 2006 TV movie is quite good in its own right. Excellent performances from Toby Stephens and Ruth Wilson, and a teleplay by Sandy Welch that is mostly true to the original. Welch departs from the book by presenting Rochester as a naturalist, and by introducing house party discussions of the scientific study of twins (???), as well as musings on the paranormal. There’s even a scene with a table transformed into a talking board. (Why add a talking board when you already have gypsy readings?)

The 2011 theatrical version is stripped-down, but effectively so. I like the Rivers family as a frame, and I do prefer Fassbender’s darker Rochester–he has a bit more menace to him and doesn’t babble so much as the original. Mia Wasikowska truly does seem little and plain(ish) in this adaptation, but also strong-willed. I think the scene that really seals the 2011 version as my favorite is when Rochester begs Jane to stay after the revelation of his dark secret. “I cannot get at you, and it is your soul that I want!” (Watch the scene–you know you want to!) I also love the ending–very compressed from the original, but somehow more satisfying to me. 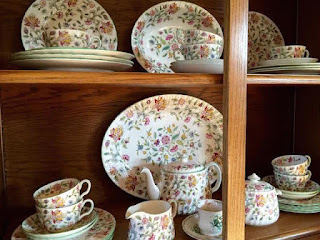 I’ve probably mentioned my Haddon Hall china from Minton before. I first saw the pattern at the Haddon Hall gift shop, but it just wasn’t feasible to ship a set back to the U.S. Fortunately, I later found pieces from various sets at Replacements.com. They don’t match perfectly, but I think that makes the collection all the more charming. And, of course, the Haddon Hall china seemed perfect for a Jane Eyre tea!

For my tea treat, I made parkin, a spicy oat cake from the north of England, particularly popular in Yorkshire (home to the Brontës).

[Parkin] is eaten in an area where oats rather than wheat was the staple grain for the poor. It is closely related to tharf cakes – an unsweeted cake cooked on a griddle rather than baked.[7] The traditional time of the year for tharf cakes to be made was directly after the oat harvest in the first week in November. For festive occasions, the cake would be sweetened with honey. In the seventeenth century (about 1650) sugar started to be imported from Barbados[b]- and molasses was a by-product of the refining process. Molasses was first used by apothecaries to make a medicine theriaca, from which name the word treacle is derived.[8] As molasses became plentiful, or treacle as it became called at that time, it was substituted for honey in the preparation of tharf cakes. (From wikipedia)

After a disastrous attempt with a different recipe, I had success with this: Parkin–a Guy Fawkes Night Tradition. The recipe is accompanied by a helpful explanation of Parkin’s connection to the 5th of November, and it uses U.S. measurements and ordinary ingredients. (I happened to have golden syrup on hand, but according to the recipe corn syrup will suffice.) 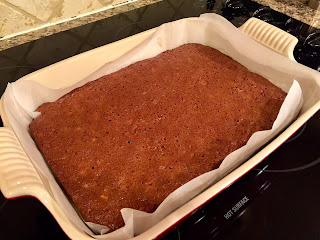 It looked a bit like a pan of brownies when it came out of the oven, but oh, the glorious spicy smell! 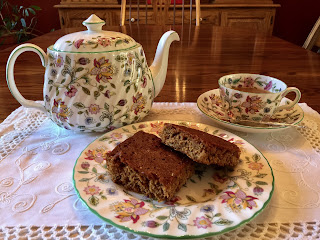 This parkin was very moist and filling. If Jane Eyre had tucked some of this in her pocket, she might not have suffered so much on the moors before the Rivers family took her in! For tea I needed something strong to match the spice of the bread, so I chose the Irish Breakfast from David’s Tea in honor of Charlotte Brontë’s Irish heritage through her father, Patrick Brontë (originally Brunty or Prunty from County Down, Ireland).

Some related links for your edification and amusement:

—The Best Yorkshire Recipes (some nice options for sweet treats here)
–A Jane Eyre tea blend from Adagio
—Every Meal in Jane Eyre, Ranked in Order of Severity, from The Toast
–A Tea with Jane Eyre necklace at Etsy
—Jane Eyre Tea Cozy patterns for knitters!
—Walnut Tea Sandwiches inspired by Jane Eyre
—Jane Eyre, the Fragrance, from Ravenscourt Apothecary (this is a NEAT site!)
–And finally, this long-time favorite: Dude Watchin’ with the Brontës from Hark, a Vagrant.