Tea and a Book and an Art Installation: The Invention of Wings by Sue Monk Kidd

I haven’t updated “Tea and a Book” since Christmas! I am determined, however, to mend my ways AND account for April with this post…

During a recent chat with my friend and crit partner Brandi, she recommended Sue Monk Kidd’s The Invention of Wings. (I think we’d been talking about Quakers, early American feminists/abolitionists, and a story I’m revising.) What a fascinating novel!

Quick take: This creative retelling of the life of Sarah Grimké, a notorious abolitionist raised in a slaveholding South Carolina household, includes the perspective of Handful (originally “Hetty”), a young slave gifted to Sarah whom she later “returns” when unable to stomach the idea of owning another human. The novel is beautifully written and thoroughly absorbing but not necessarily an easy read due to the horror and heartbreak that shadow these women’s lives. Yes, this was an Oprah book and perhaps you’ve all read it already, but I still wished to celebrate it.

Goodreads synopsis: Hetty “Handful” Grimké, an urban slave in early nineteenth century Charleston, yearns for life beyond the suffocating walls that enclose her within the wealthy Grimke household. The Grimke’s daughter, Sarah, has known from an early age she is meant to do something large in the world, but she is hemmed in by the limits imposed on women.

Kidd’s sweeping novel is set in motion on Sarah’s eleventh birthday, when she is given ownership of ten year old Handful, who is to be her handmaid. We follow their remarkable journeys over the next thirty five years, as both strive for a life of their own, dramatically shaping each other’s destinies and forming a complex relationship marked by guilt, defiance, estrangement and the uneasy ways of love. 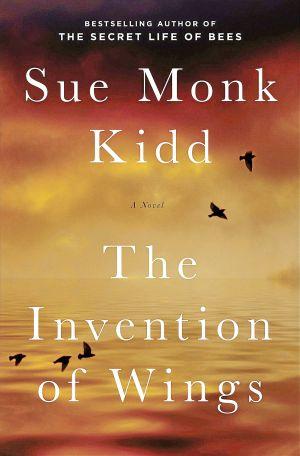 Sarah: I saw then what I hadn’t seen before, that I was very good at despising slavery in the abstract, in the removed and anonymous masses, but in the concrete, intimate flesh of the girl beside me, I’d lost the ability to be repulsed by it. I’d grown comfortable with the particulars of evil. There’s a frightful muteness that dwells at the center of all unspeakable things, and I had found my way into it. (130)

Handful: We’d leave, riding on our coffins if we had to. That was the way mauma had lived her whole life. She used to say, you got to figure out which end of the needle you’re gon be, the one that’s fastened to the thread or the end that pierces the cloth. (386)

I happened to be in Brooklyn when I finished the novel, and imagine my surprise when I learned from the author’s note that Kidd was inspired to write this story after seeing Judy Chicago’s “The Dinner Party” at the Brooklyn Museum:

The Dinner Party is a monumental piece of art, celebrating women’s achievements in Western civilization. Chicago’s banquet table with its succulent place settings honoring 39 female guests of honor rests upon a porcelain tiled floor inscribed with the names of 999 other women who have made important contributions to history. It was while reading those 999 names on the Heritage Panels in the Biographic Gallery that I stumbled upon those of Sarah and Angelina Grimké, sisters from Charleston, South Caroline, the same city in which I then lived. (…) Leaving the museum that day, I wondered if I’d discovered the sisters I wanted to write about. Back home in Charleston, as I began to explore their lies, I became passionately certain. 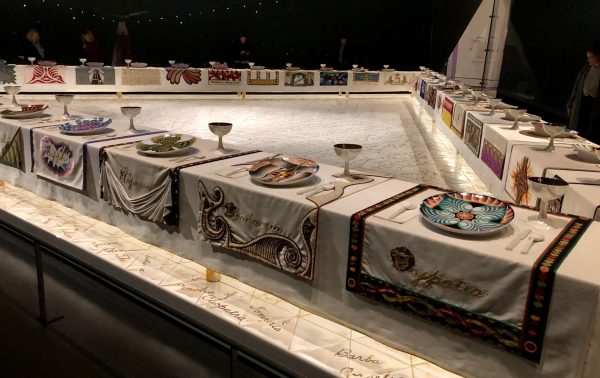 I already was well acquainted with The Dinner Party because my stepmother experienced it soon after it was first exhibited (1979) and had shared her enthusiasm with me. I won’t lie–as a kid I found the concept rather weird. When I saw it in person this past Saturday, however, I was overwhelmed by its impact. I circled the table at least four times and took my time studying my favorite settings (which you can see at my Instagram). 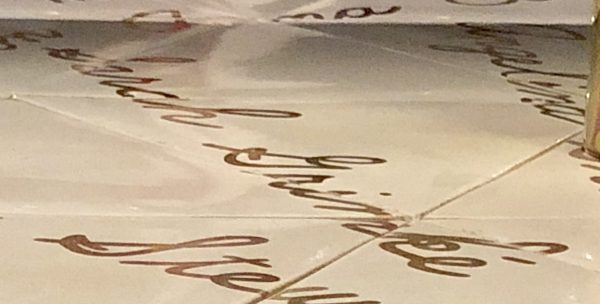 I even crouched on the floor and searched until I found the inscription for Sarah Grimké, appropriately located near the Sojourner Truth table setting.

This may be a cheat, but I still think it’s appropriate. After being dazzled by The Dinner Party I really wasn’t that interested in the rest of the museum. Instead I was HUNGRY. So I made my way to the museum restaurant (The Norm) and bellied up to the bar. As soon as I saw their brunch options I knew exactly what to order–the Horchata French Toast. 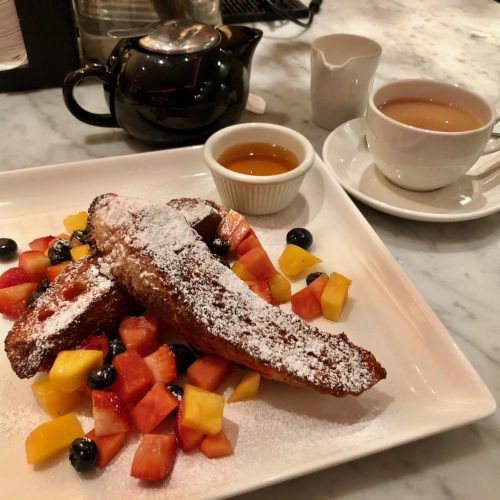 MY GOLLY. This crunchy french toast with blueberries, mango, strawberries and a spiced maple syrup was absolutely divine. The English Breakfast tea paired perfectly. Every bite/drop was consumed and cherished!

Stay tuned for more from my Brooklyn trip!