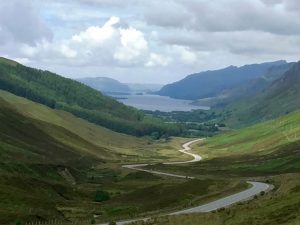 On Sunday we flew to Inverness for five days in Scotland. We spent the first two nights on the Black Isle at Cromarty, a lovely little village. My photographs from the stay aren’t that impressive, however, because the weather was a bit dreary. I was terribly fond of Cromarty, but for now let’s move on to the more dramatic west coast sights near Gairloch. (We’ll revisit Cromarty when I post my blog on tea. Yay!) 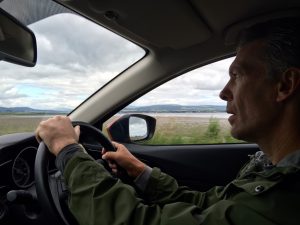 First, I must praise my husband and, to a lesser extent, satellite navigation. I’ve never driven overseas, and Steve hadn’t for over a decade (not since we drove to Brontë country and he nearly abandoned the car in Bradford out of terror and frustration). What a difference a built-in sat nav makes! I wouldn’t say Steve was relaxed about driving this time around, but he was very good at it, particularly when the roads narrowed to a single lane, which happened A LOT. 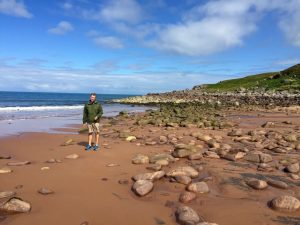 One of our first driving adventures was out to the beaches at Red Point. The day started gloomy but turned quite fine as you can see. No filter on any of these photos–it was just that beautiful! And we nearly had it all to ourselves (but were happy to share). 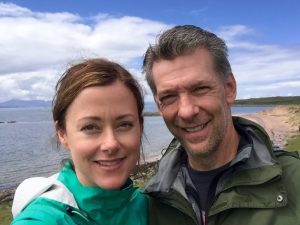 Obligatory (and somewhat squinty) selfie. As we were leaving this beach, we ran into a group of pony trekkers. Later we walked to the Gairloch Trekking Center and watched two children grooming a pair of fat little ponies as part of the “Kids Stable Special” program. Do check out the gallery on their webpage–guaranteed to make you smile! 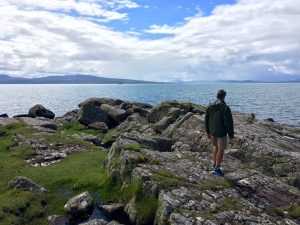 We were able to explore this rocky outcropping while the tide was out. You can see the Isle of Skye across the water — it was huge! Why did I think Skye was a wee island? 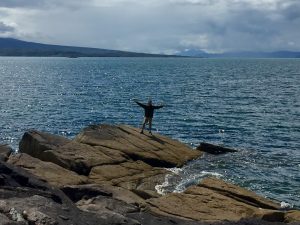 I didn’t have the nerve to walk to the edge, but that’s okay because it meant I could take this photo. 🙂

Stay tuned for more postcards from the Highlands!