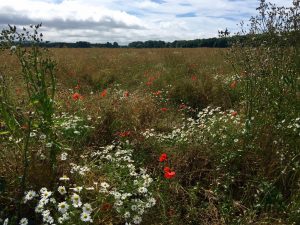 A field overrun with wildflowers near Moreton-in-Marsh

After our Scotland adventures, it was time to move on to Oxford. We decided to spend our only free day visiting Chastleton House, which involved a train to Moreton-in-Marsh and lots of walking through the Cotswolds. Huzzah! 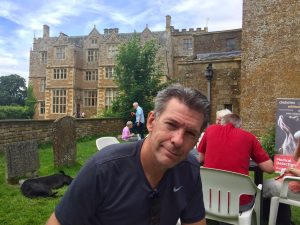 We were pretty hungry when we arrived. Fortunately the adjoining church, St. Mary’s, was offering tea and cake in return for donations to a charity supporting Medical Detection dogs. (This tickled me because I so enjoyed reading Nancy Cataldo’s marvelous Sniffer Dogs.) It actually was quite lovely to eat cake in the churchyard among the gravestones! 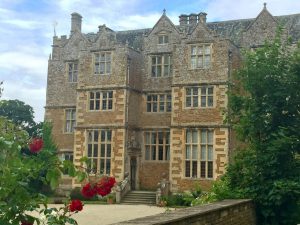 Chastleton House was built in the early 17th century by a wealthy wool merchant. Hardly any updates were made over the last 400 years, and although the exterior has held up quite nicely, the interior had fallen into terrible disrepair by the late 20th century. (We heard tales of a dotty old lady living there with 30 cats while the house was falling apart around her–you know how I aspire to love that sort of thing!) The National Trust bought the house in 1991 and has been in the process of restoring it ever since. 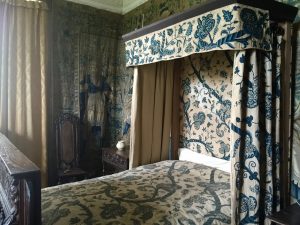 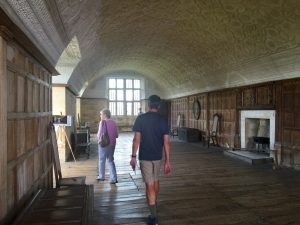 [As always, click images for a larger view]
In most historic houses, only a few rooms are available for public viewing because the resident family prefers to maintain some privacy. Well, since no one actually lives at Chastleton anymore, we were allowed access to a surprising number of rooms. I was excited to learn that Chastleton was featured in the BBC adaptation of Hilary Mantel’s Wolf Hall. In fact, a key scene between Thomas Cromwell and Anne Boleyn was filmed in the Long Gallery, seen above at the right. Learn more about Chastleton House as a filming location here. 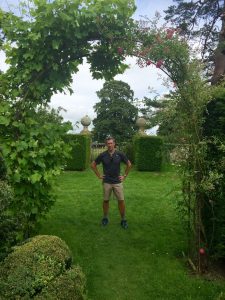 It was quite relaxing to wander in the topiary garden. I love this description from the National Trust website:

The garden has nods to changing garden fashions but still largely has its Jacobean layout, with divisions according to use. And it still preserves its secret garden feel of ‘romantic neglect’. 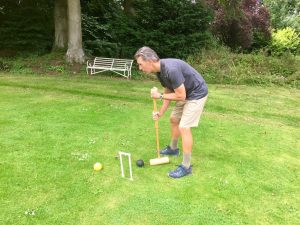 We wrapped up the day with an impromptu game of croquet. Did you know that the rules of croquet were codified at Chastleton House? They were written by Walter Jones Whitmore and published on April 7, 1866.