In my previous post featuring the work of Eva Ibbotson, I enthused about a Swedish word found in one of her novels:

smultronställe is a noun meaning that special place treasured or yet to be discovered. It could be an idyllic opening in the forest, a quiet beach, a small village, your childhood summer farm, a charming café or just about any place that is special to you, that you cherish and that has a special place in your heart.  (https://learnswedish.globatris.se/2017/07/smultronstalle/)

I’ve always been fascinated and deeply affected by place, so this term resonated with me so profoundly that I needed my own category of blog posts to celebrate various smultronställes I’ve experienced! Today I’ll start with the first one that came to mind, and perhaps every other month or so, I’ll add more.

St. Cross Church can be found in the Holywell parish of Oxford. (You might remember when I included it in my literary walk of Dorothy Sayers’ Oxford.) I’ve never been inside the church, as far as I remember, because it was turned into a research facility for Balliol College in 2008. But I always wanted to see it, and loved visiting again and again, because this was the location for the fictional wedding of Lord Peter Wimsey and Harriet Vane, beloved characters created by mystery writer/poet/essayist/Oxford alum Dorothy Sayers.

Just now I located my copy of Busman’s Honeymoon and re-read the various accounts of the Vane/Wimsey wedding. I think the Duchess of Denver offers the most detail about the church and the wedding:

We went to Oxford and found the place–an obscure little church in a side-street, very gloomy and damp-looking. It turned out that the bride was being married from a Woman’s College, of all places. […] The bride came attended by the most incredible assortment of bridesmaids — all female dons! — and an odd, dark woman to give her away, who was supposed to be the Head of the College. I am thankful to say, considering her past history, that Harriet (as I suppose I must now call her) had enough sense of propriety not to get herself up in white satin and orange-blossom; but I could not help thinking that a plain costume would have been more suitable than cloth of gold. I can see that I shall have to speak to her about her clothes, but I am afraid she will be difficult. […] They were married in the old, coarse Prayer-book form, and the bride said “Obey”– I take this to be their idea of humor, for she looks as obstinate as a mule.

There’s another literary association very meaningful to me–Kenneth Grahame, author of Wind in the Willows, is buried in Holywell Cemetery, which lies next to St. Cross Church. What I didn’t know before I visited his grave is that his only child, Archibald Grahame, is buried right along with him. Wind in the Willows started with stories Grahame would include in his letters to his son, whom he addressed as “Mouse.” Though this sounds sweet, some argue that Archibald’s difficult personality inspired the reckless and mischievous character of Toad, and that Grahame used the stories as a way of placating a boy who was yearning for much more fatherly attention. Archibald struggled throughout his short life and eventually committed suicide on an Oxford railroad track just before his 20th birthday. Such a sad ending, but it soothes me to think of them reunited forever in Holywell Cemetery. 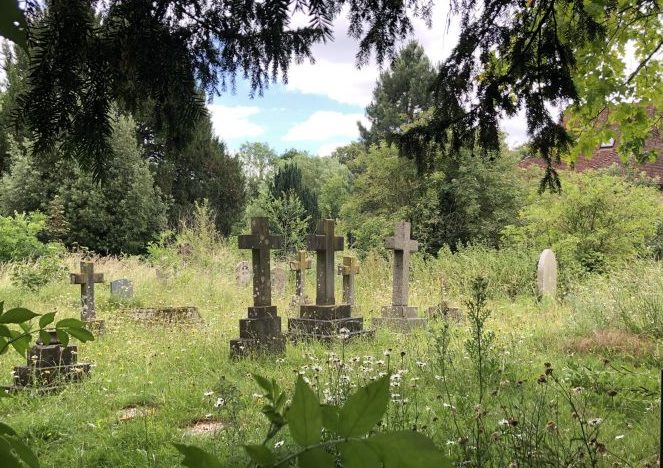 St. Cross and Holywell Cemetery are magical even without the literary associations. Every summer Steve and I spent in Oxford we would walk there at least once and often enjoyed a picnic lunch among the graves. Oxford City Center is always teeming with international students and tourists during the summer months–there’s barely room to breathe–so it’s good to have spots further out in which to find peace and quiet. Also, having grown up across the street from a cemetery, I’ve always felt an affinity for these quiet places where the dead rest. (I’m sure this had nothing to do with my current obsession with Gothic! 😉)