Quick take: I was in the mood for something light and quirky, and Dear Mrs. Bird by A.J. Pearce fit the bill perfectly.

Goodreads synopsis: London, 1940. Emmeline Lake is Doing Her Bit for the war effort, volunteering as a telephone operator with the Auxiliary Fire Services. When Emmy sees an advertisement for a job at the London Evening Chronicle, her dreams of becoming a Lady War Correspondent suddenly seem achievable. But the job turns out to be working as a typist for the fierce and renowned advice columnist, Henrietta Bird. Emmy is disappointed, but gamely bucks up and buckles down.

Mrs. Bird is very clear: letters containing any Unpleasantness must go straight in the bin. But when Emmy reads poignant notes from women who may have Gone Too Far with the wrong men, or who can’t bear to let their children be evacuated, she is unable to resist responding. As the German planes make their nightly raids, and London picks up the smoldering pieces each morning, Emmy secretly begins to write back to the readers who have poured out their troubles.

My thoughts: I love stories about English women “doing their bit” on the home front during World War II, so this premise was particularly appealing. Emmy is plucky and sympathetic, and her narrative moves along at a good clip. Though I call it “light and quirky,” you will encounter some peril and heartache due to the wartime setting. I found one of the conflicts a bit clunky, but overall it was a very absorbing read.

If you liked Guernsey Literary and Potato Peel Pie Society, or just enjoy “WWII home front” stories, you’ll probably enjoy this. I’d also recommend Lissa Evans’ Crooked Heart and Their Finest Hour and a Half, the latter of which was adapted into a very good film starring Gemma Arterton and Sam Clafin. And don’t forget the Middle Grade novels by Kimberly Brubaker Bradley, The War that Saved My Life and The War I finally Won. (I discussed the first book here.) Also, several of Angela Thirkell’s novels are set during the war. What am I missing? I’d love to know your recommendations for “WWII home front” stories.

Now for tea: Bread and Butter Pudding seemed the perfect choice for a book set during the war because the ingredient list is short and simple (with the bonus of recycling your stale bread), and the result is wonderfully comforting.

I followed this easy recipe from The Splendid Table. I used a rather ordinary loaf of grocery store French bread, but you could use any bread you like. A friend suggested using leftover Christmas pannetone–doesn’t that sound delicious!? I must remember that during the holidays. 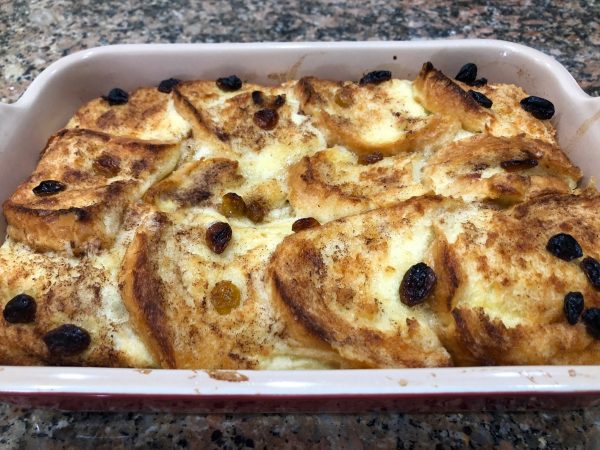 Here’s how mine looked just out of the oven. The next day I spooned some warm milk over it (for lack of cream) and garnished with a few berries, as you can see at the top of this of this post. Other options: add a dollop of your favorite jam or drizzle with heavy cream or custard. Vanilla ice cream would work, too!

Adagio’s Irish Breakfast, with its bold blend of Ceylon and Assam, paired well with the pudding.

October will be all about SPOOKY FILMS, so “Tea and a Book” will return in November!