September Tea & a Book: The Enchanted April & Miss Pettigrew Lives for a Day

Several years ago I enjoyed film adaptations of these novels written by women in the early 20th century. For September’s post I decided to finally READ the novels. What a delight!

I began with The Enchanted April by Elizabeth von Arnim. (published 1922) 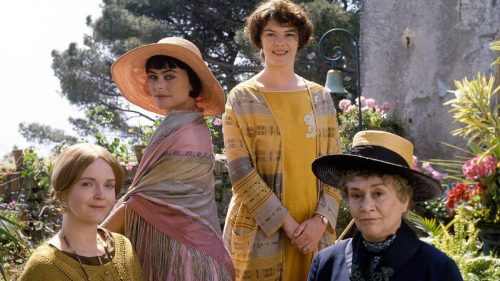 The publisher’s synopsis: Four women, with very different backgrounds and characters – the artless Lottie Wilkins, the pious Rose Arbuthnot, the cantankerous Mrs. Fisher and the haughty Lady Caroline Dester – respond to an advertisement in The Times offering a medieval castle to rent in Italy that April. As their joint holiday begins, tensions flare up between them, but they soon bond over their past misfortunes and rediscover hope and the pleasures of life in their tranquil surroundings.

A favorite passage: “Rose clasped her hands tight round her knees. How passionately she longed to be important to somebody again –not important on platforms, not important as an asset in an organization, but privately important – just to one other person, quite privately, nobody else to know or notice. It didn’t seem much to ask in a world so crowded with people, just to have one of them, only one out of all the millions, to oneself. Somebody who needed one, who thought of one, who was eager to come to one – oh, oh how dreadfully one wanted to be precious!”

My thoughts: This film was a feast for the eyes and the character arcs were emotionally satisfying. The book, however, allowed much more access to the protagonists’ inner lives. It’s easy enough to learn the characters’ opinions and idiosyncrasies through dialogue–and this was pretty much all to be had from the film–but in reading the book I was privy to their deepest desires and fears. How lovely it was to celebrate their unspoken epiphanies!

**I will mention that the character of George Briggs is quite different in the book. I actually prefer the film’s characterization, but the book is still MARVELOUS, of course!

Next was Miss Pettigrew Lives for a Day, by Winifred Watson (published 1938) An excerpt from the publisher’s synopsis: a governess [is] sent by an employment agency to the wrong address, where she encounters a glamorous night-club singer, Miss LaFosse.

A favorite passage: “[Miss Pettigrew] felt grand. She felt brimming with authority and assurance. It was a marvellous sensation. She thought scornfully of her former timid self. A futile creature! Fear! Had she once known fear? Impossible. She felt surging with pugnacious intentions. She wanted to do battle with some one for the sheer sake of downing them gloriously and proving her powers. She eyed the room with the light of battle in her gaze. Who would offer her combat?”

My thoughts: This story was rather stressful! And at times, sordid. (With some casual racism thrown in.) Usually I am not drawn to stories about night clubs and women with multiple lovers. Our titular heroine, however, is a gem — a down-on-her-luck outsider who maintains her dignity and consistently does the right thing. The payoff comes in the concluding chapter. Oh, how I appreciated the sweetness of the ending! (It made up for the stress of earlier scenes.)

The author, Winifred Watson, was still alive when the Persephone edition was released. If you happen to read it you’ll enjoy the preface by Henrietta Twycross-Martin because she was able to visit the 93-year-old Watson at her home in Newcastle and have a good long chinwag. Watson, who claimed to have had “a perfectly ordinary and uninteresting life,” wrote four other novels in addition to Miss Pettigrew, was married with a son, and lived to the ripe old age of 96. Huzzah! 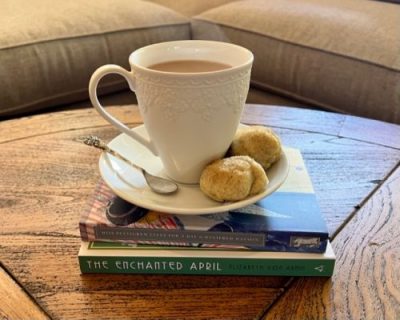 London is an important location in both books featured in this post; therefore I chose the Notting Hill blend from Tea Palace — “a robust and aromatic infusion that balances bold, spicy black tea flavours with a touch of sweet bourbon vanilla and flashes of bright yellow for celebratory flair.” To pair with this tea, I baked gluten free vanilla bean sugar cookies from William & Sonoma, which were super easy to make. I didn’t follow directions well at all and they still turned out moist and delicious. Perfect for a tea party!

October is coming! Stay tuned for next month’s spooky “tea and a book” recommendation.