We leave in 5 days. I’ll be so glad to see my kitty and be reunited with all the conveniences of home, but I’m dreading the heat of Oklahoma. And it’s been such a great summer that I’m really going to miss this place.

We enjoyed many adventures with our friends this past week. 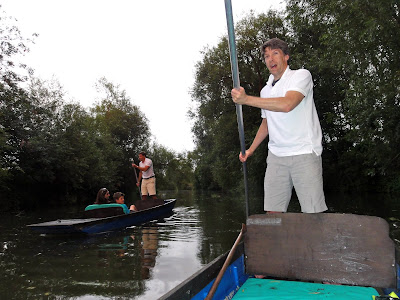 Last Tuesday we punted to the Victoria Arms with John and Liesa Richter (& kids). From their lovely holiday cottage on the river it was a 40 minute punt — made a little longer than usual by the fact that Steve struggled at first with the technique. (We knew better than to let me have a go at it.) I wore my punting hat (there is no such thing, I just felt I needed a white hat.) Unfortunately, hats always transform me into a little old lady, but this one did protect me from the rain that began to fall as we neared the pub. It rained pretty heavily while we ate, so the cushions got soaked, but once we flipped them over we were mostly dry. It did get a little dark, however, as you see above. And at one point I was distracted from the scenery by the sound of Steve crying “Oops!” This was what he was oopsing about. We were able to paddle back to retrieve the pole, but not before John ran over it in his punt. Fortunately, it popped right up! 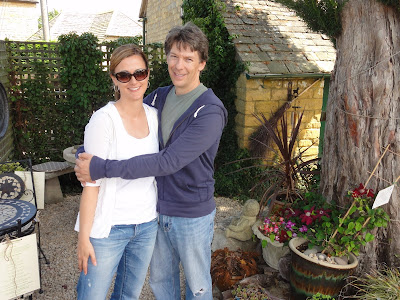 On Friday we drove out to Bourton-on-the-Water and from there hiked about 8 miles through the Cotswolds. Here we are lunching at The Old Mill in Lower Slaughter, which has one of our very favorite riverside cafes. From Lower Slaughter we made our way to Stow-on-the-Wold, where we met program director Bob and his wife Carolyn for refreshments at Huffkins. 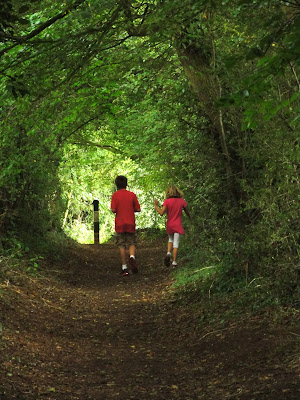 From Stow we rambled through scenic meadows and wooded paths (as seen above) toward Donnington, and from there to Longborough, where we had a fantastic night of eating and dart playing at The Coach and Horses. 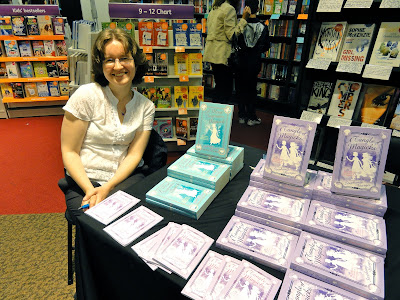 Saturday took me on an entirely different but equally fabulous adventure. I traveled to Bath and joined fellow Elevensie Stephanie Burgis and her husband (my agent-sibling) Patrick Samphire for tea at the Jane Austen Centre Regency Tea Rooms (note portrait on the far wall). I felt instantly at ease with them, so time passed quickly, and before long we were moving on to Waterstones, where Stephanie signed her latest Kat book (A Tangle of Magicks in the UK, or Renegade Magic in the U.S.) After the very successful signing, we collected a group of writers for tea at the Pump Room. (Yes, I had a lot of tea that day. You know I’m not complaining!) I was so busy chatting with Harriet Castor, Amy Butler Greenfield and Alex Dally Macfarlane that I forgot to take any photos. I really hope to meet up with them again. Thanks for setting this up, Stephanie! 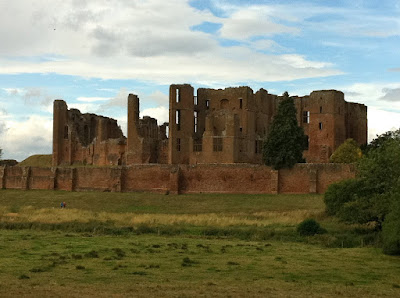 Sunday morning we rejoined the Richter family for a drive north to Kenilworth Castle. We enjoyed climbing over the ruins, peering through windows, and touring the lovely Elizabethan garden. Best of all was imagining Robert Dudley and Elizabeth canoodling in various secret nooks, for it seems that Dudley poured a lot of money into Kenilworth in the hopes of impressing the young queen and perhaps convincing her to marry him. 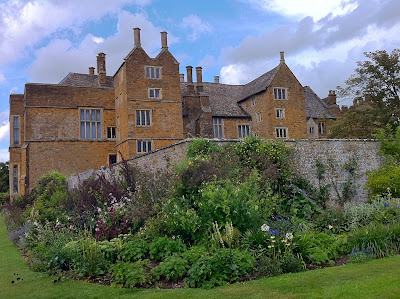 After Kenilworth we drove south to Broughton Castle, near Banbury — the sort of place that’s easiest accessed by car. This 14th century castle, still inhabited by Lord and Lady Saye and Sele (who were walking the grounds with their grandchildren while we toured) had a lovely moat and garden. Liesa and I decided that we needed to watch Shakespeare in Love again, since parts of it were filmed here and its star, Joseph Fiennes, is cousin to Lord Saye and Sele!

We ended the day with a meal at The Trout in Wolvercote, which never fails to please. Such a memorable weekend!