October tea and a book: The Crowfield Curse

Early this month I listened to Ric Jerrom’s exquisite voice performance of Pat Walsh’s The Crowfield Curse while driving home from Iowa, and nothing I’ve read since has topped it. Though it’s not a horror story, it does offer chills and thrills fitting for Halloween.

The story revolves around fourteen-year-old Will, an orphan taken in (and put to work) by the monks of Crowfield Abbey. One day when collecting wood in the forest, he encounters a creature caught in a trap. When the creature speaks to him, Will knows he’s stumbled upon something strange and magical. He frees the hob and soon enough is thrust into a gripping conflict involving a leper on a quest, a war between Fey kingdoms, and a faith-related mystery.

I loved so many things about this novel: the insider’s look at life in a medieval Benedictine abbey, the encounters with magical beings, the eerie perils of Whistling Hollow, and, most of all, the truth behind the aforementioned mystery. You guys! There is a scene in this book, a scene of awe and transcendence, that had me in tears. All I can say is if you have even a passing interest in medieval England, and are open to mysteries with fantasy and supernatural elements, this would be a great read for you.

I didn’t know much about the book before I listened — it was recommended to me by the analytics of Audible.com — so I won’t give more details. I’d love for you to be as pleasantly surprised as I was! However, if you need a little more info before leaping in, I very much appreciated this review from Amazon (though for some reason it misidentifies the setting as seventeenth century). Just so you know, I loved the audio so much that I purchased the hardcover copy. And I look forward to seeing Will again in The Crowfield Demon.

Check out the cool trailer:

And now for tea!

I suppose if I were being true to the book, I’d have a tea of rancid lard on bread with a cup of ale to wash it down. (!!!) I decided instead to make something sweet and spicy. In fact, I experimented with a flourless recipe that might appeal to my paleo friends! Keep in mind that I’m not an old hand at baking with almond butter and ground flaxseed, and thus these Flourless Pumpkin Pie Muffins were not exactly a breeze for me to make. (My blender was NOT happy.) As you might imagine, the muffins do not rise to fluffy heights, and I think I added too many chocolate chips. (Is this possible? Apparently, yes.) But overall I was pleased with the results. 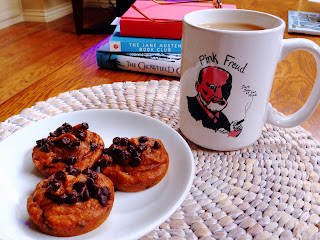 The muffins were even better the second day, and though I have three pictured here, just one satisfies my sweet tooth quite nicely. The tea is a fair trade Assam I purchased at the Co-op in Waterloo, Iowa. 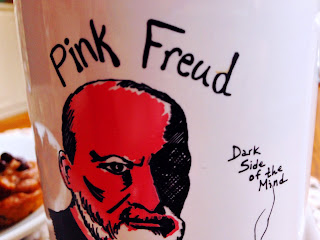 The cup came from Waterloo, too! It belonged to my ex-stepmother Rosemary, but I fell so deeply in love with it during my visit that she secretly stashed it in my bag before I hit the road back to Oklahoma. Thanks, Rosemary! The cup’s concept could make for a great costume, eh? (Well, maybe for a grad school Halloween party.)