For various reasons this has not been my best year for reading, but the situation seems to be improving of late. Today I have two books to recommend, and though they don’t have that much in common, they both celebrate female relationships. 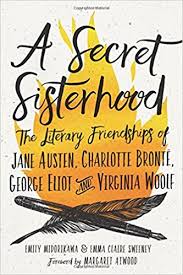 A Secret Sisterhood synopsis: Male literary friendships are the stuff of legend; think Byron and Shelley, Fitzgerald and Hemingway. But the world’s best-loved female authors are usually mythologized as solitary eccentrics or isolated geniuses. Coauthors and real-life friends Emily Midorikawa and Emma Claire Sweeney prove this wrong, thanks to their discovery of a wealth of surprising collaborations: the friendship between Jane Austen and one of the family servants, playwright Anne Sharp; the daring feminist author Mary Taylor, who shaped the work of Charlotte Bronte; the transatlantic friendship of the seemingly aloof George Eliot and Harriet Beecher Stowe; and Virginia Woolf and Katherine Mansfield, most often portrayed as bitter foes, but who, in fact, enjoyed a complex friendship fired by an underlying erotic charge.

Through letters and diaries that have never been published before, A Secret Sisterhood resurrects these forgotten stories of female friendships. They were sometimes scandalous and volatile, sometimes supportive and inspiring, but always–until now–tantalizingly consigned to the shadows.

If you know me at all, you understand how thrilled I was to hear about this book! I was especially delighted to learn that the co-authors have been close friends for years. That said, it took me a little while to sink into their narratives. Part of this stemmed from their “creative” approach — Midorikawa and Sweeney often convey details through reconstructed scenes, which I found a bit jarring at first. (When I reached the footnotes, however, I saw that all these “scenes” were carefully annotated.) Another challenge was balancing my expectations with what I already knew about the featured authors.

For instance, I’m a passionate fan of Jane Austen and feel like I know her characters well, but I haven’t yet read the author’s letters or a detailed biography. (I promise to read Jane Austen’s Letters, edited by Deirdre le Faye, very soon! And doesn’t this book look good?). As I delved into the first chapter, I think I had unrealistic expectations regarding Austen’s friendship with the family governess, Ann Sharpe. As it turned out, their acquaintance was not as enthralling as I’d hoped, perhaps because the facts were a bit sketchy and for the most part originated from the journals of Jane’s young niece, Fanny Knight. I was glad to learn that Jane knew another writer, and of course I’m always interested in governesses — especially those who “scribble” — but for me this was the least fleshed-out friendship in the book.

On the other hand, I already knew a great deal about Charlotte Brontë’s relationships with Ellen Nussey and Mary Taylor from reading biographies and letters (I particularly recommend Juliet Barker’s The Brontës: A Life in Letters), so the details revealed in the second chapter, though compelling, were mostly familiar to me. Your mileage may vary, but for me the first two “Secret Sisterhoods” were entertaining but not particularly revelatory.

That said, I truly enjoyed and learned much from the chapter on George Eliot/Marian Evans’ friendship with Harriet Beecher Stowe. Middlemarch ranks among my very favorite novels, but I never knew that much about its author and now feel compelled to find a good biography. (Perhaps I’ll start with My Life in Middlemarch and see which biography Rebecca Mead recommends?) Stowe was a vivacious personality and, lo and behold, an avid Spiritualist (much to Evans’ dismay). Though I don’t yearn to read her fiction, I think it might be interesting to read more about Stowe’s life.

The authors’ take on Virginia Woolf’s complicated relationship with Katherine Mansfield was perhaps my favorite part of the book. I’ve read To The Lighthouse and A Room of One’s Own and have always felt intimidated by Woolf’s intellect, but Midorikawa and Sweeney presented her in a very accessible way. No longer will I automatically think of her as the tormented genius who drowned herself, for I have replaced that default image with one of a younger Virginia painstakingly setting the type for her Hogarth Press publications. Katherine Mansfield was the least familiar to me of all the published authors featured in the book, but she was such a vivid character in this chapter that I do intend to explore her short stories and perhaps read her letters and journals.

Now I turn to you, dear reader — can you recommend collections of letters or journals by favorite authors? I own and still need to read Dorothy Sayers’ letters, and I know there are multiple volumes of L.M. Montgomery’s journals to be had. What else? 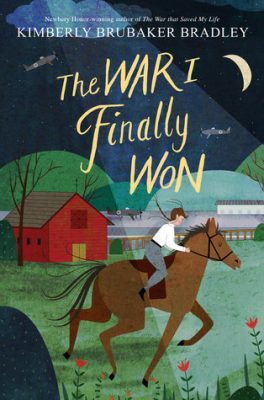 The sequel to Kimberly Brubaker Bradley’s The War that Saved My Life (which I recommended in this “tea and a book” blog post) was such a joy to read. I don’t want to say too much in case you haven’t read the first book, but the wartime setting is even more compelling in this book, especially because we learn more about Lord and Lady Thornton and are introduced to a new character who boards with Susan, Ada, and Jamie. All the clichés apply: I laughed, I cried, I couldn’t put it down, I didn’t want it to end, and though it all wraps up in a satisfying way I would love to have MORE. Of course, I’m not the only one who feels giddy about the book, for it has received umpteen starred reviews and is an Amazon and NYT bestseller. HOORAY!