I love tea and I love books, so why not combine the two in a blog post? Each month I’ll attempt to pair tea and something scrumptious with a good book. In some cases, the book will even reference tea — bonus!

Let’s start with my recent re-read of the two novellas that make up A.S. Byatt’s Angels and Insects. 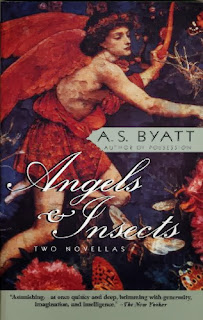 Hmmm . . . how best to summarize them quickly? “Morpho Eugenia” is the tale of a working class English naturalist who falls in love with the fragile, tragic daughter of a wealthy baronet, Oh, is he in for many surprises! And “The Conjugial Angel” centers around a group of Spiritualists who, individually and as a group, take things a bit too far with a séance. (This one has real people as characters, including Emily Tennyson Jesse, the sister of the renowned poet, who was at one time engaged to Arthur Hallam, the subject of Tennyson’s In Memoriam.) 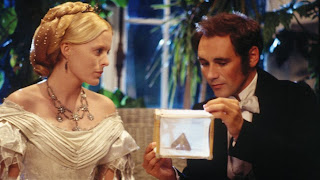 By the way, some of you may know that “Morpho Eugenia” was made into a film entitled Angels and Insects, which features one of my very favorite actors–and former artistic director of The Globe–Mark Rylance (whom I saw play Pericles, and I was right up against the stage and so close that I could have touched his leg had I let myself do such an inappropriate thing). Anyway, Angels and Insects is one of my all-time favorite films, but I must warn you that it is very much rated R.

Back to tea — happily, there are references to it in both novellas.

In “Morpho Eugenia,” we learn that Eugenia’s mother, Lady Alabaster, “seemed to spend most of her day drinking–tea, lemonade, ratafia, chocolate milk, barley water, herbal infusions, which were endlessly moving along the corridors, borne by parlourmaids, on silver trays. She also consumed large quantities of sweet biscuits, macaroons, butterfly cakes, little jellies and dariole moulds, which were also freshly made by Cook, carried from the kitchen, and their crumbs subsequently removed, and dusted away” (30).

In “The Conjugial Angel,” following the final séance, hostess Mrs Jesse pours tea. “The oil-lamps cast a warm light on the tea tray. The teapot was china, with little roses painted all over it, crimson and blush-pink and celestial blue, and the cups were garlanded with the same flowers. There were sugared biscuits, each with a flower made out of piped icing, creamy, violet, snow-white. Sophy Sheekhy [the medium] watched the stream of topaz-coloured liquid fall from the spout, steaming and aromatic” (333). 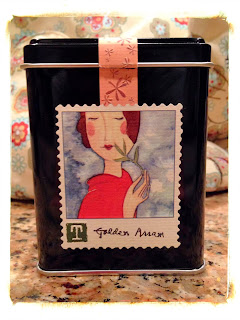 For my tea, I chose this Golden Tippy Assam from Tealeaves, described as “a full-bodied cup with deep, copper liquor noted for its lively character and distinctly malty flavour.” 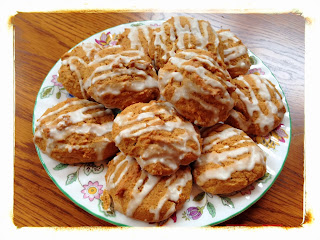 For my tasty treat, I flirted with the idea of making butterfly cakes (see lovely recipes here and here), but even though that would have been so appropriate for “Morpho Eugenia,” I decided the cakes would be much better for spring than fall. So I went with the idea of “sweet biscuits” and baked these easy iced pumpkin cookies, which are perfect for a Thanksgiving treat. 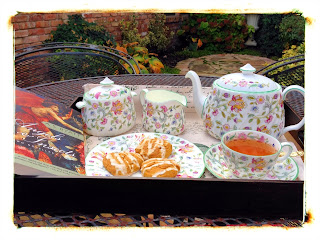 Then I dusted off my English china and put everything on a tray for tea on the patio. Hooray!

Now I’m off to find a book for December that will inspire a festive holiday tea. Any suggestions?