As we continue with ghostly B&W films from Martin Scorsese’s 11 Scariest Horror Movies of All Time, I must confess how much I love Henry James’ Turn of the Screw. I’ve read it several times, seen the play, seen the opera, seen (& taught) the 1999 BBC adaptation with Jodhi May and Colin Firth, and I never can get enough. Therefore I was eager to see this classic B&W adaptation starring Deborah Kerr.

What Scorsese has to say:
This Jack Clayton adaptation of The Turn of the Screw is one of the rare pictures that does justice to Henry James. It’s beautifully crafted and acted, immaculately shot (by Freddie Francis), and very scary. 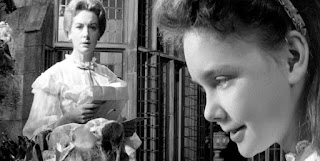 The story: a wealthy man hires a young, inexperienced governess to educate his nephew and niece and to preside over the running of his remote country estate. The only catch? He will be elsewhere, and she must never bother him with questions or concerns. Despite this, our governess makes a good start. The house and grounds are beautiful, and young Flora seems a delightful girl.

(Notice the use of deep focus in the above shot–Flora is smiling sweetly, but the shot is a little creepy, isn’t it? Overall there is a very claustrophobic feel to the way this film is shot, and it heightens the horror in a lovely way.) 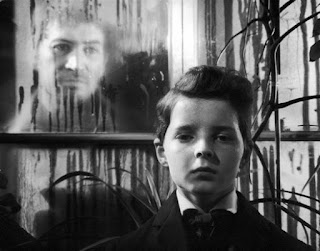 Everything changes when young Miles is sent home from school. He’s a charming boy, but Miss Giddens* suspects more is going on. The children sometimes behave oddly together and are suspiciously secretive. The more she learns about their past, the more certain she is that they are haunted . . . and perhaps even in danger of becoming possessed.

*The governess is unnamed in the original story 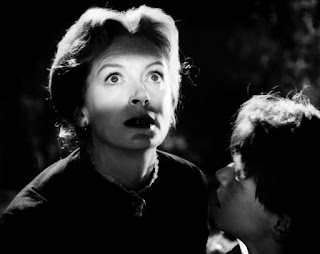 She is determined to save their souls, no matter the peril.

Like the previously discussed films, The Innocents features a slow build of psychological horror rather than sudden shocks or gore. Still, I’d rank this one a little higher on the fright scale. It’s dark, tense, and at times, very disquieting. If there are any other fans of The Innocents out there, do share your favorite things about it (as long as they’re not terribly spoilery)!

One thing that lingered in my mind long after the film was over — the song “Willow Waly.” We hear Flora singing it before the opening credits begin, and it continues as a refrain throughout. It beguiles and chills at the same time:

P.S. I just learned of a 2009 TV adaptation of Turn of the Screw with Michelle Dockery and Dan Stevens (Lady Mary and Cousin Matthew)! What what? By all accounts it is terrible, and yet . . . I might have to take a look.