My final ghostly offering from Martin Scorsese’s 11 Scariest Horror Movies of All Time is the unforgettable and endlessly re-watchable The Haunting, directed by Robert Wise (who made the film between directing West Side Story and The Sound of Music — not too shabby).

What Scorsese has to say:
“You may not believe in ghosts but you cannot deny terror!” was the tagline for this absolutely terrifying 1963 Robert Wise picture about the investigation of a house plagued by violently assaultive spirits.

So what’s the story? As Dr. Richard Markway explains in the introductory voice-over: “It was an evil house from the beginning – a house that was born bad.” Markway (Richard Johnson) sets out to gather “psychically-inclined” people to study Hill House. Only two show up — fragile Eleanor Lance (Julie Harris) and stylish clairvoyant Theodora (Claire Bloom). The young man who will inherit the house, skeptical Luke Sanderson (Russ Tamblyn), joins them as well. 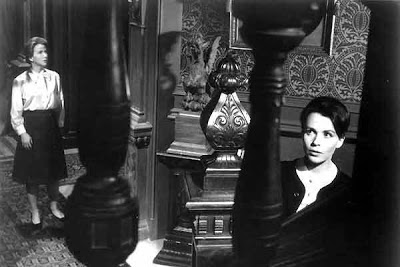 Like all the films I’ve recommended, this is not a shock and gore fest. In fact, tension and dread build slowly as the four explore the house. One thing I love is how, unlike the claustrophobic tight shots of The Innocents, the 30mm wide angle Panavision lens of The Haunting often made the characters seem small and helpless, almost as if they might fall out of frame. (I wish I had a better example to show you than the one above.) Tilted shots and quick cuts also contribute to the viewer’s disorientation.

The house is creepy enough by day, but the horror really kicks into gear at night. Every time I sit through these scenes of Nell and Theo in their bedroom — scenes in which we see nothing but fear everything — my heart pounds wildly. It’s genius!

Is the house warping its inhabitants — making them paranoid, fearful, unhinged — or are their pre-existing neuroses feeding the house? Both? I love this off-center shot of Eleanor in high contrast lighting.

I first saw The Haunting shortly after reading Shirley Jackson’s brilliant The Haunting of Hill House, and I could only focus on the differences between novel and screenplay. Now I appreciate that this film is quite wonderful on its own terms. If possible, get your hands on the DVD with commentary. I find it so interesting to hear how Julie Harris felt isolated and depressed during filming, and how she thought the other castmembers were buddying up and sometimes even making fun of the film, which she found disrespectful. The other actors all remark on how Julie Harris isolated herself purposefully, as if she were method acting. Richard Johnson has loads to say about his performance, Robert Wise’s direction, and the differences between film and stage acting. (He’s very charming and eloquent.) And the input from Robert Wise and screenwriter Nelson Gidding, each now deceased, is priceless.

And this concludes my Halloween ghostly film rec series. I do hope you will revisit at least one of these B&W classics. If you do, please let me know what you think!