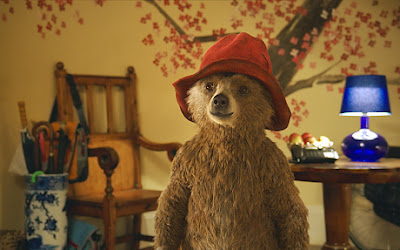 Steve grew up with the books and cherished his very own stuffed Paddington bear. I, on the other hand, hardly knew anything about this world-traveling, marmalade-loving creature. But after seeing a few positive reviews of the film, I decided we needed a little whimsey from the big screen this weekend.

Turns out it was one of the best films I’ve seen in a long time!

The script is clever and funny — appealing both to kids and adults — and the performances are top notch. Ben Whishaw does amazing work as the voice of Paddington (so glad he stepped in when Colin Firth didn’t work out), and I could go on and on about the high quality CGI and cinematography, as well as the delightful set design of the Browns’ house. There’s so much to gush about! But why don’t I link you to some professional reviewers who had high praise for the film:

The official trailer wasn’t nearly as charming as the film, so I’ll include this clip of the Brown family’s first encounter with our bear from darkest Peru:

Please go see it, and take the kiddos!