As research for a new story, I recently watched four B&W ghostly films from Martin Scorsese’s 11 Scariest Horror Movies of All Time. Note to the scaredy cats: on a scale of heart-pounding,jump-out-of-your-seat horror, these movies rate fairly low, so even you might want to check them out!

The first offering is Dead of Night (1945), featuring stories from H.G. Wells, E.F. Benson, and screenwriters John Baines and Angus MacPhail (the latter of whom wrote for Hitchcock and apparently coined the term “MacGuffin“): 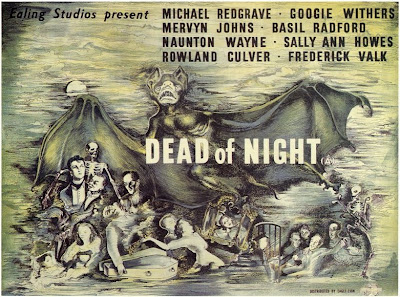 In the words of Scorsese:

A British classic: four tales [my note: actually five] told by four strangers mysteriously gathered in a country house, each one extremely disquieting, climaxing with a montage in which elements from all the stories converge into a crescendo of madness. […] it’s very playful…and then it gets under your skin.

The frame story for this film is so cleverly scripted and skillfully performed that it’s easy to hand wave the preposterousness of how these people came together to tell their tales. Dead of Night also has a lovely Noir* feel to it. There are no sudden moments of screamworthy shock; rather, it’s a slow burn of confusion, alienation, and psychological horror. 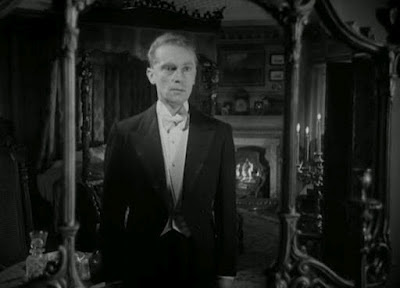 My favorite story within the collection, based on “The Chippendale Mirror” by E.F. Benson, features a very unique sort of haunting. A man’s fiancée buys an antique mirror as a wedding present. One day when he’s alone and checking his appearance, he notices that the reflection does not match the surroundings of his apartment. In fact, he sees himself in a darkly sumptuous bedroom with a four poster bed and fireplace, seemingly from another time. He’s the only one who sees it, and it starts to drive him mad . . . 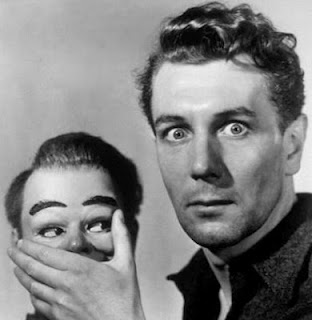 The most disturbing tale in the film offers Michael Redgrave as an unhinged ventriloquest whose dummy seems to be rebelling against him. Did any of you ever see Magic with Anthony Hopkins? I did, and I was too young to really understand what was going on. It haunts me to this day, and this story brought it all back. It’s worth checking out the film for Redgrave’s performance alone.

For me, the only unsatisfying part of Dead of Night was the story of the golf buddies fighting for the love of the same woman. There’s a ghost, yes, but it wasn’t enough to get me past the idiocy of the premise.

You science buffs might get a kick out of this little bit of trivia from the Internet Movie Database: Cosmolgists Fred Hoyle, Thomas Gold and Hermann Bondi, developed the (now discredited) Steady State theory of the universe, an alternative to the Big Bang, after seeing “Dead of Night”. They said that the circular nature of the plot inspired the theory.

*Speaking of Noir and circular plots, I saw Looper yesterday. LOVED IT. Such an ambitious screenplay is bound to have a few holes in it, but I appreciate Rian Johnson for taking risks and making me think. Lots of fine performances, too. I was totally swept up in the story.