May Tea and a Book: Fell Murder & Murder in the Mill Race by E.C.R. Lorac

Continuing with our focus on early 20th century female writers, May’s “Tea and a Book” features two cosy mysteries (yay!) by E.C.R. Lorac (1894-1958). Lorac wrote quite prolifically under three pseudonyms, so check out her impressive catalog on Wikipedia.

Fell Murder (1944) and Murder in the Mill Race (1952) feature village settings and the sleuthing skills of Chief Inspector MacDonald from Scotland Yard. Both are well worth reading, but if you only have time for one I’d recommend Fell Murder for the Lancashire setting and the presence of two (!!) strong female characters. Both novels feature outdated attitudes toward disability and gender here and there, but when I considered that they were written EIGHTY years ago, the occasional awkward bits were easier to gloss over. Your mileage certainly may vary. I, for one, plan to read much more from Lorac. 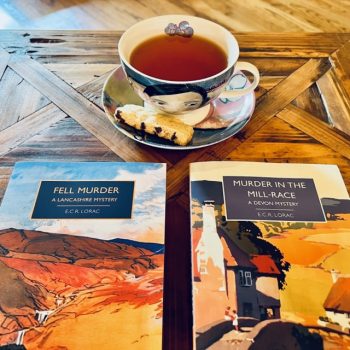 My friend DeAnne, a librarian, recommends this Shedunnit podcast for more about E.C.R. Lorac.

For tea I brewed a cup of “Little Dickens,” a favorite herbal blend from Bellocq—“loved by all, this caffeine-free tisane is blended from organic, fair trade South African rooibos, vanilla, cacao nibs, ginger, soothing mint, and cinnamon.” I also nibbled on a shortbread from the Shortbread House of Edinburgh, in honor of our sleuth’s ancestry. ❤️