May Tea and a Book: All Things Cease to Appear, by Elizabeth Brundage

Recently I began to watch the Netflix original film, Things Heard and Seen, which seemed exactly my kind of spooky with its tale of a young couple settling into an old house with a tragic history. I appreciated how it offered a slow burn of horror rather than an onslaught of CG jump scares. The story is concerned with relationships and secrets in a close-knit community — more mystery than horror, but involving ghosts and unresolved conflicts from the past. After the first hour, I paused to check reviews at IMDB and noted that opinions on the film are mixed. However, when I tracked down the book that inspired the screenplay, All Things Cease to Appear, I found scads of rave reviews, including a very favorable blurb from Stephen King. At that point I stopped the movie and started the book.

THERE WAS SOMETHING odd about the house. A chill flourished in some rooms and an odor seeped up from the cellar, the rotting carcasses of trapped mice. Even in gentle summer, when the world outside was singing its bright song, an oppressive gloom prevailed, as if the whole house had been covered, like a birdcage, with velvet cloth. Still, she accepted all this as one accommodates a troubled child. But the house had not accepted her. (110)

This book is wonderfully Gothic, but the more I read, the better I understood that it’s not really a ghost story. It’s a mixture of mystery, thriller, and police procedural, seasoned with romantic longing, betrayal, and spookiness. If you enjoy edgy, character-driven mysteries, do check this one out! I could not put it down. 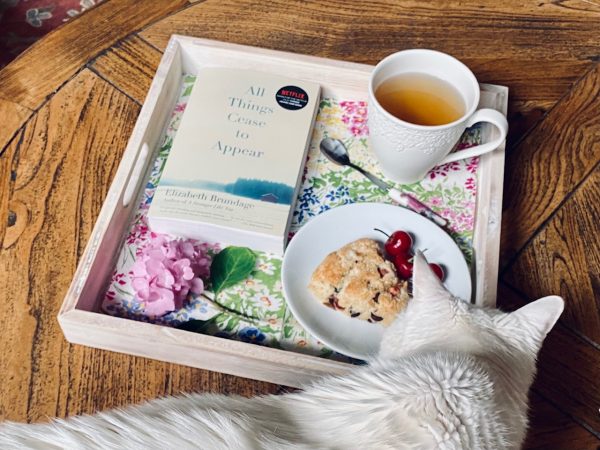 For tea I offer gluten-free cherry-chocolate scones, which came out better than expected (and proved quite tantalizing to Cedric). I added chocolate chips and diced fresh cherries to King Arthur’s Gluten Free Scone Mix and ended up with moist, delicious scones. For tea, A Woman’s Wrath seemed a fitting option. This herbal blend from Carytown Teas is recommended for “treating common problems, symptoms and effects of Menopause and PMS” and is delicious with a bit of honey, but I chose it mostly for the name. 😉