I am such a fan of Stella Gibbons, so it seems strange that I’ve only read four of her novels. You can see them above, except for The Woods in Winter, a strange yet endearing story I read on my kindle. Today I want to share Westwood, a story I struggled with and yet couldn’t put down. It’s not rollicking fun like Cold Comfort Farm, nor is it romantic like Nightingale Wood. It’s perhaps more about a slightly delayed “coming of age” in WWII London? But I’ve also seen it referred to as “middlebrow Gothic.”

It’s impossible to convey the plot in a sentence or two, but Westwood features a young middle class teacher living in Hampstead Heath, London, who develops an obsession with a neighboring highbrow family, in particular the patriarch and playwright Gerald Challis. The reader gleans early on that Challis is not a worthy recipient of Margaret’s yearning admiration, so at times it is painful to witness her machinations to be near him. However, there is a payoff if one is patient, part of which is Margaret meeting Lady Challis, Gerald’s mother, who (in my mind) is a shining beacon of hard-earned female independence.

Upon finishing this book I was tickled to find “‘A Pleasure of that Too Intense Kind’: Women’s Desires and Identity in Stella Gibbons’s Gothic London,” by Rebecca Mills, published by Studies In Gothic Fiction (2020). I refrained from reading the entire article because I haven’t yet read Here Be Dragons, but this thesis statement resonated:

Gibbons’s little-studied London novels Westwood (1946) and Here Be Dragons (1956) present romance and marriage as threats to young women’s comfort, self-sufficiency, and subjectivity. Excessive emotion and eroticism imperil these women’s independence and identity, while the men they desire embody the temptation and corruption of the city. Gibbons employs Gothic language of spells, illusion, and entrapment to heighten anxieties around stifling domesticity and around subjugating the self to desire. The London Gothic settings and atmosphere, and the trope of the double, reinforce cautionary tales of the ill-effects of submission to love.

Fortunately I already have Here Be Dragons in my possession, so that will be next. But look at all these other Gibbons books I have hoarded and not yet read. I am equal parts ashamed and excited.

And there’s so much more! Gibbons was quite prolific, and these titles remain to be tracked down. (Do let me know if you’ve read any of these): 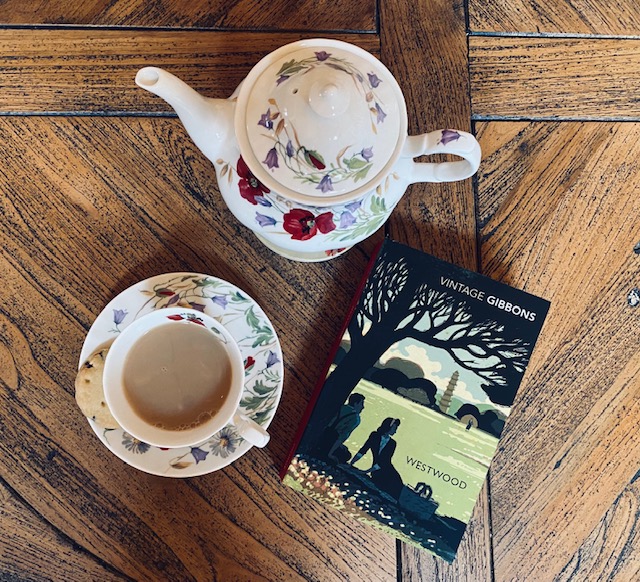 I chose Assam Superior from Tea Palace, one of my very favorite tea purveyors, paired with one of their scrumptious Chocolate & Orange shortbread cookies. Do take a moment to check out all the gorgeous offerings at Tea Palace’s website.

Any other Gibbons fans out there? Do you have a favorite of her novels to recommend?