Make it a scene

Maggie Stiefvater recently dissected a chapter of THE SCORPIO RACES on her blog, and it was so detailed and helpful that readers clamored for more. Maggie, being a helpful soul, invited other writers to go through the same process with a chapter of their own, and I was honored to be included. As a former teacher and someone who loves to do school visits, I’m always eager to put something together that I could share on my blog and explore in more detail with teens in a classroom setting.

I stand before you quite nervous because, you guys! I only have one book published. I’m very new at this and still have much to learn.

So I’m going to be a wee bit rebellious and change the format. Rather than dissect one chapter, I’m going to look at two passages, comparing the first editorial draft to the published version in order to show how expanding a piece of exposition into a scene can help transform your spindly armature of a draft into the sculpture you had in mind.

What am I talking about? Let me give you some context: I was fortunate to have the opportunity to hear Karen Cushman speak at an SCBWI event. I was particularly heartened by a metaphor she used for her writing, one in which she characterized her first draft as a sculptor’s armature and her subsequent revision as a process of layering words and scenes like clay. (Omigosh, if you need a visual you can see the whole process from armature to finished project in this blog post!) I’ve always been an underwriter — my first drafts are very spare and require much fleshing out. So today I’m going to share two sections of The Revenant that I expanded (and hopefully improved) by turning spare exposition into “fleshier” scenes.

From Chapter 3, editorial draft:
I kept to my room as much as possible, reviewing the texts that Miss Crenshaw had provided for me. I’d thought to be teaching basic skills to rough Indian girls, but as I pored over McGuffey’s Sixth Ecelectic Reader and Swinton’s Studies in English Literature, I knew a battle lay in wait. This was no charity school full of girls grateful for instruction in proper speech and manners. This was an institution of higher learning, and the students thought too highly of themselves to be grateful for anything I had to offer. The part I played had become more challenging, but there was no turning back.

The morning bell was to ring at 5:30 on Wednesday, but I woke hours before dawn.

One of the things my editor pointed out from the start of our revision process was that I needed to develop the relationship between Willie and her colleague Olivia (who plays a role in solving the murder mystery) AND show in more vivid detail just how Willie’s struggles with her teacherly duties. (She is, after all, a 17-year-old who is impersonating a teacher.)

In my very low-tech scans below (sorry!), start with the second paragraph: 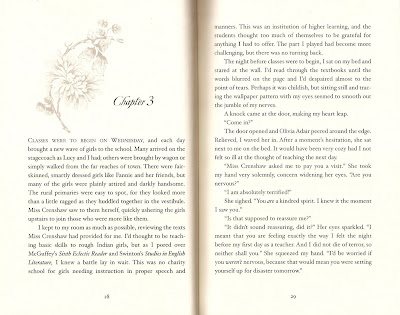 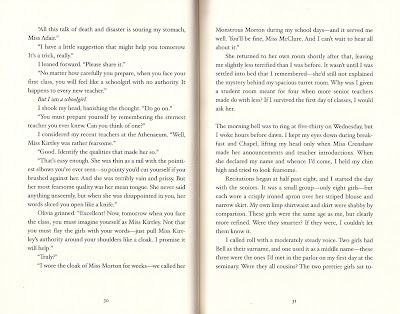 1) helps characterize Olivia (she well remembers the first day jitters, is excited to have another new teacher at the school, and is a giving rather than competitive person — willing to share survival tips and encouragement)
2) depicts the blossoming friendship between Olivia and Willie
3) shows Willie’s uneasiness (through her “Yellow Wallpaper” moment, heh), and . . .
4) reinforces the theme of theatricality that runs throughout the book (Willie, the daughter of an actor who is herself pretending to be someone else, connects to Olivia through the idea of teacherly authority as “performance”)

I only could have written this scene, small and quiet as it is, after having written many drafts of the entire manuscript. My editor wanted to develop Willie’s friendship with Olivia, but that meant I had to get to know Olivia better myself. Although I bristled a bit when first confronted with this idea, I now know full well that Olivia started out as a plot device — mostly just a convenient sounding board for Willie. That’s why she, in the original draft, disappears for 100 pages while Willie engages in all the interesting things. (How did this book ever sell?) Thinking about what to add to flesh Olivia out helped me to understand her better and subsequently to write scenes that convey how her friendship is a driving force behind Willie’s growth.

From Chapter 13, editorial draft:
I’d looked froward to going to Olivia’s house at the end of term and shedding the role of “Miss McClure, seminary teacher” to just be Willie, a girl visiting her friend. Anyone as sweet as Olivia must have cheerful parents, and I was curious to spend time with a proper family, one in which everyone laughed and teased and scolded out of love.

I relied on this visit to help me put Mr. Sevenstar from my mind. I welcomed any distraction that could keep me from reliving the conversation at the Bell home, for I wearied of tearing his sentences apart and examining each word as though it were a specimen under a microscope. It was a fruitless endeavor.

But in the end I had to decline the offer. Not by choice, but because Miss Crenshaw called me into her office and commanded I stay at the seminary to get my grade book in order.

That third paragraph is just screaming for a scene, isn’t it? Maybe I avoided it at first because I was so eager to get to the paranormal shenanigans that lay ahead, but once my editor made the point that I didn’t show Willie struggling enough with her teaching duties, this seemed the perfect place to take a really inert piece of exposition and bring it to life through a scene. 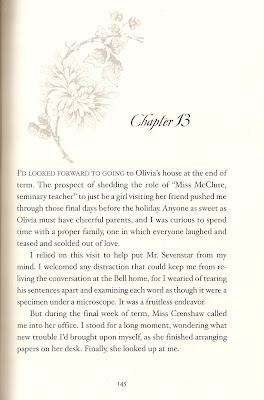 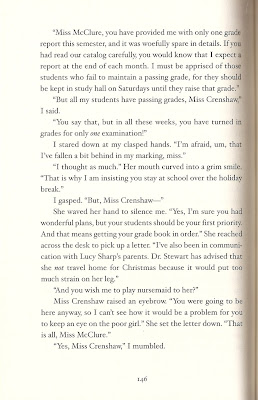 It’s not a long scene. It’s probably not anyone’s favorite scene. But in two pages I turned “Miss Crenshaw called me into her office and commanded I stay” into an actual confrontation in which Willie is chastised about her failings and made to sweat over them a bit. There’s a nice tension — we want Willie to have a holiday with her bestie Olivia, but she’s NOT DOING HER WORK. She can’t get away with that! So while we (the reader) sympathize with her sense of outrage, we’d probably feel betrayed if she continued to get away with cheating her way through teaching.

This scene is also a nice bookend to a later scene — another confrontation between Wilie and Miss Crenshaw in Crenshaw’s office — in which the principal is absolutely deflated by a schocking revelation and Willie sees, for the first time, that this scary old crow of a woman is quite human and vulnerable. (*sniffle*)

Concluding thoughts:
If you are an underwriter like me, it might help to search out those inert bits of exposition and decide which ones could do more work for you as a scene. Think about how long that scene should be (for instance, the above scene between Willie and Miss Crenshaw needs to be short and snappy, don’t you think?). How much can be usefully/effectively conveyed? If the scene bogs down or doesn’t convey anything useful or new — if it’s just there to be pretty or clever — maybe it needs to stay in the form of narrative summary.

Anyone else have tips on how to choose between exposition and scene? (I know exposition has become a bad word, but can you avoid it entirely?) If you are more of an overwriter (as in, you create a huge chunk of clay and then have to whittle it down), how do you decide which scenes MUST stay and which should be collapsed into narrative summary or cut altogether? Any examples? I’d love to hear from you.