July Tea and a Book (a bit delayed): The Making of a Marchioness by Frances Hodgson Burnett

Continuing with women’s fiction from the early 20th century, today I’m pleased to share Frances Hodgson Burnett’s The Making of a Marchioness in a gorgeous paperback edition from Persephone that includes its sequel.

The publisher has this to say: “Little Lord Fauntleroy (1886) and The Secret Garden (1911) are enduring bestsellers, but this 1901 novel is many people’s favourite: Nancy Mitford and Marghanita Laski loved it, and some U.S. college courses teach it alongside Pride and Prejudice and Jane Eyre.”

First published in 1901 as The Making of a Marchioness [and followed by its sequel], the two novels were combined into Emily Fox-Seton, who is the two works’ primary character. The story follows thirty-something Emily who lives alone, humbly and happily, in a tiny apartment and on a meager income. She is the one that everyone counts on but no one goes out of their way to accommodate. Her fortune changes, however, and the second half chronicles her adaptation to her new life and the dangers that arise from those who stand to lose most from her new circumstances.

I was immediately captivated by this introduction to our heroine:

She was a woman of good blood and of good education, as the education of such women goes. She had few relatives, and none of them had any intention of burdening themselves with her pennilessness. They were people of excellent family, but had quite enough to do to keep their sons in the army or navy and find husbands for their daughters. When Emily’s mother had died and her small annuity had died with her, none of them had wanted the care of a big raw-boned girl, and Emily had had the situation frankly explained to her. At eighteen she had begun to work as assistant teacher in a small school; the year following she had taken a place as nursery- governess; then she had been reading-companion to an unpleasant old woman in Northumberland.

Fortunately, Emily is invited to stay with the most esteemed of her various employers, Lady Maria Bayne, and once there she unwittingly draws the attention of a wealthy Marquis. (“Unwitting” is the very essence of Emily’s character, and yet I do love her so!) As it turns out, Emily’s new friend, the beautiful but penniless Lady Agatha, is hoping this very gentleman will propose to her and thereby save her family from financial ruin! As you might expect, Emily resigns herself to spinsterhood, but all it not lost…

NOTE: Keep in mind that there are two novels within the Persephone edition. The second novel is very much a Gothic pot-boiler and there are some unsavory characterizations of an Indian governess/maid who is scheming against our heroine. I cringed quite a bit, and yet still managed to enjoy this sensation story, especially considering it was published 120 years ago. Your mileage may vary, of course. 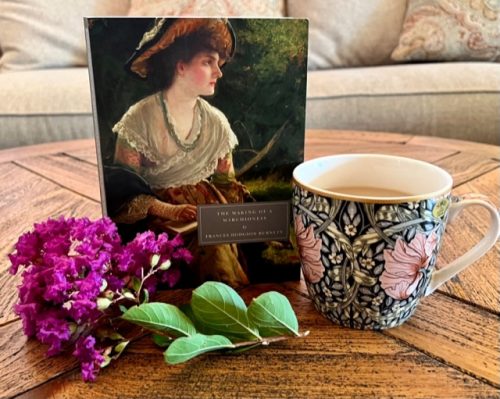 I’m afraid I did not go into a frenzy of baking, having just returned from overseas travel. I did, however, make a lovely cup of Vanilla Almond Tea (from Republic of Tea) in my new William Morris mug that I purchased at the Ashmolean Museum, which happened to be featuring an exhibit of Pre-Raphaelite watercolors and sketches while we were in town. Tea is so much more delightful in a beautiful cup or mug, don’t you think? Especially when there’s a lovely memory attached to the purchase.

***P.S. THERE IS A 2012 FILM ADAPTATION OF THIS NOVEL ENTITLED THE MAKING OF A LADY! Apparently it is rather short and focuses mostly on the Gothic sequel. See viewing options here.***