January tea and a book: the Blandings novels

Okay, so I didn’t shake it up that much. But I deliberately chose a male author, and the stories are set in a slightly earlier period. Plus I have TWO books to recommend (with more to come, I’m sure.) 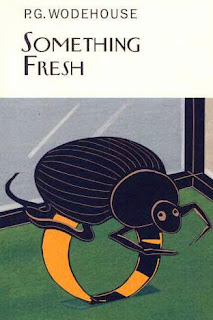 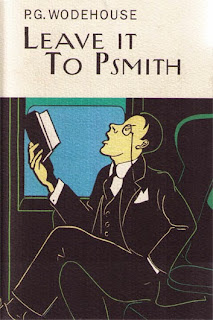 Both of these books involve the garden-obsessed and rather bumbling Lord Emsworth, who hosts weekend parties where very silly crimes are committed, crimes that are perpetrated and/or exposed by guests using false identities. Lord Emsworth’s featherbrained son, Freddie, is always in the thick of the trouble, and we end up rooting for whichever pair of guests seems to be falling in love. Wodehouse tends to assign most of the cleverness to his female characters, which is refreshing. And what a surprise to encounter Psmith (the “p” is silent), who wears a monocle (see above) and talks a great deal of piffle! Was Dorothy Sayers inspired by Wodehouse when she created Lord Peter Wimsey? Or is it simply that all Old Etonians wear monocles and talk piffle? Hmmmm… 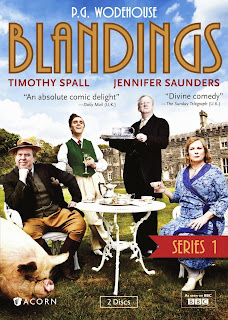 And check this out! I think the series is based on the early collection of Blandings short stories, so I’m looking forward to watching soon. Any fans of this TV adaptation out there?

The cup of tea on arrival at a country house is a thing which, as a rule, I particularly enjoy. I like the crackling logs, the shaded lights, the scent of buttered toast, the general atmosphere of leisured cosiness.

P.G. Wodehouse, The Code of the Woosters

I’ve noticed in various English novels set between the wars that bread and butter or buttered toast often feature in tea offerings, particularly in those gatherings that take place before guests return to their rooms to leisurely bathe and dress for a late supper. Buttered toast is one of my favorite things to eat with tea, but I always like to add a little orange blossom honey: 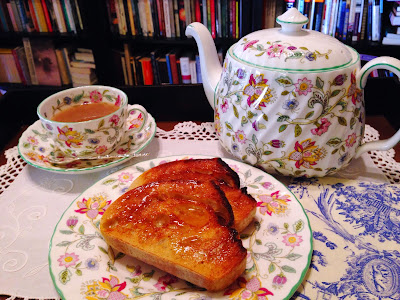 The bread for the toast is from Panera — I love their country loaf because it has generous air pockets in which the butter and honey like to dwell.

For the tea I chose Royal Breakfast from Paromi, purveyor of organic teas. (I found mine at Whole Foods, but it’s also available to purchase online.) Described as “a majestic blend of hand-picked black teas from the Dibrugarh District in Assam, India and the Red River in Vietnam’s Yen Bai province,” the Royal Breakfast is wonderfully brisk and satisfying.

(I also bought the Coconut Almond and just now noticed that they offer a Chocolate Orange blend. Wow!)