In which I am a jerk about REBECCA

I recently listened to an audiobook of Daphne du Maurier’s REBECCA. Having read the book as a teen and enjoyed many viewings of the Hitchcock film since then, I was looking forward to revisiting the story, especially because I’ve long considered it the best of all the JANE EYRE reimaginings. (Oh, and it was read by Harriet Walter, one of my favorite actresses who also happens to do a splendid job with audiobooks.)

Things started out just fine, but it didn’t take long for my skin to start crawling. It was acutely painful to experience the story from inside the 2nd Mrs. de Winter’s head. I found myself constantly comparing her to Jane Eyre, as one might expect. Jane also is young, poor, and utterly smitten with a sexy tortured soul who is far above her station. But unlike the 2nd Mrs. de Winter, our Jane — dear Jane! — values herself. She has a healthy sense of self-worth and a strong moral compass. She may be poor and plain, but at the same time she knows she is clever, talented and most important of all, equal to Rochester in the eyes of the highest authority.

Here is my first and only warning. If you are a diehard fan of REBECCA, stop here. It is so hard for me to read someone else bashing a book I love, so if you love this book with all your heart, don’t continue. Or if you’re still hoping to read it and don’t wish to read HUGE SPOILERS, please don’t read any further.

By contrast, the 2nd Mrs. de Winter considers herself childish, slow, unnattractive, and gutless. She is not worthy of Maxim’s love, but she needs him so desperately that she’ll do anything, suffer any humiliation, to hold on to him. Sometimes this need seems motivated by her obsessive love for him. At other times it has more to do with a need to save face. Consider her thoughts after she has worn the infamous dress from the portrait and suffered Maxim’s hissy fit:

As I sipped my cold tea I thought with a tired bitter feeling of despair that I would be content to live in one corner of Manderley and Maxim in the other as long as the outside world should never know. If he had no more tenderness for me, never kissed me again, did not speak to me except on matters of necessity, I believed I could bear it if I were certain that nobody knew of this but our two selves.

My marriage was a failure. All the things that people would say about it if they knew were true. We did not get on. We were not companions. We were not suited to one another. I was too young for Maxim, too inexperienced, and more important still, I was not of his world. The fact that I loved him in a sick, hurt, desperate way, like a child or a dog, did not matter. It was not the sort of love he needed. He wanted something else that I could not give him, something he had had before. (my bold) 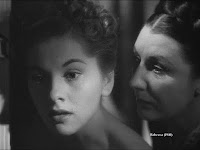 After this she wallows in torturous thoughts of “Rebecca, Rebecca, Rebecca” (which I hear in my head much like Jan Brady whining “Marcia, Marcia, Marcia!”), and before long Mrs. Danvers has nearly talked her into killing herself. But wait, she hasn’t hit rock bottom yet! There are further abasements, such as when Rebecca’s body is found. What? That body in the crypt is not Rebecca? What’s going on here? The 2nd Mrs. de Winter doesn’t really care about the specifics — she just wants things to work out with Maxim:

“Maxim,” I said, “can’t we start all over again? Can’t we begin from to-day, and face things together? I don’t want you to love me, I won’t ask impossible things. I’ll be your friend and your companion, a sort of boy. I don’t ever want more than that.”

AND THEN! Maxim finally confesses. HE SHOT REBECCA POINT BLANK, STRAIGHT THROUGH THE HEART. He murdered her and scuttled her boat to hide the evidence. When Jane Eyre learns that Rochester’s been keeping a mad wife in the attic, she hightails it out of Thornfield because he’s done BAD THINGS (lying and attempted bigamy). But how does the 2nd Mrs. de Winter react to her husband’s confession of murder? Well, she’s a little numb with shock at first. One might think this is the calm before the storm of her freaking out that her husband is a stone-cold wife killer. But no . . . turns out she’s ECSTATIC! She doesn’t care that Maxim killed Rebecca — all that matters to her is that he never loved her:

He came and stood before me. He held out his hands. “You despise me, don’t you?” he said. “You can’t understand my shame, and loathing, and disgust.”

I did not say anything. I held his hands against my heart. I didn’t care about his shame. None of the things that he told me mattered to me at all. I clung to one thing only, and repeated it to myself, over and over again. Maxim did not love Rebecca. He had never loved her, never, never. They had never known one moment’s happiness together. Maxim was talking, and I listened to him, but his words meant nothing to me. I did not really care.

I looked away from him so he should not see my face. What did it matter whether I understood him or not? My heart was light like a feather floating in the air. He had never loved Rebecca.

She is the QUEEN of all ninnies!

And Maxim? He is a creepy wife-killer who 90% of the time behaves like a condescending ass to her. In the end he, like Rochester, loses his precious ancestral home to fire. But is he really punished for his sins? NO. (Unless you consider it a punishment to spend the rest of your life with a self-loathing and subservient twit. Hmmmm.) At the moment I kinda hate this book.

Maybe du Maurier intended it to be ironic? Maybe she meant for us to hate the 2nd Mrs. de Winter. The “heroine” is never named, so perhaps it was du Maurier’s intention for us to see her as a spineless cipher. I haven’t read much in the way of du Maurier biography or criticism, so I have no idea if any of it speaks to this. Perhaps there’s a whole layer of meta that I haven’t figured out yet. In a crazy way, I kinda have to give du Maurier props for pulling this off — a gothic romance in which the romantic hero is a murderer and the heroine GLADLY stands by him? That could never be a bestseller, right?

“HA HA, YOU ARE ALL DUPES, MY BANK ACCOUNT THANKS YOU,” says Daphne.

All right, I am fully vented. For anyone who’s still reading, I think we should lighten things up by watching Mitchell and Webb’s comic spin on REBECCA: