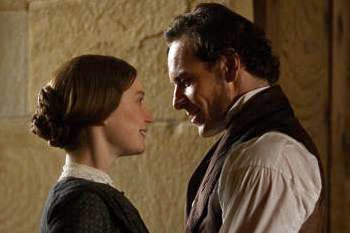 Yes, I drove down to Dallas to see this movie, for it seems that it won’t be coming to my area for the rest of this month.

(But I think it’s doing fairly well in the box office, considering its limited release, so perhaps it will come sooner? I hope so, because I want to see it AGAIN!)

I was very pleased. You should know, however, that I’ve been a fan of Michael Fassbender for quite some time, so I was fully prepared to adore him as Rochester. Yes, he’s too handsome. No, he doesn’t tease and torment Jane quite as much as he does in the book. I was okay with both of those changes! He’s quieter, but still intense. His relative calm made the more passionate scenes all the more dramatic. And in the end? Oh! How I love the final scene!

I quite liked Mia Wasikowska. At times, such as when her grave face would break into a quick smile (in reaction to Rochester), she reminded me of fellow Aussie Anna Torv. She’s small and fragile*, but still manages to be fierce. I loved her physicality and her expressive face. (*I hope, once filming was done, that someone handed Mia a plate of cheeseburgers. She was TINY.)

The film locations and cinematography were nothing less than spectacular.

I admired the streamlined script. There’s not as much of the Jane/Rochester banter — and some might find their growing attraction underdeveloped — but considering the time limitations of a theatrical release I thought Moira Buffini did a lovely job. There’s this moment, after the BIG REVEAL, when Rochester says something to Jane that I’m SURE isn’t in the book, but it’s so intriguing — I almost think it’s a response to Wide Sargasso Sea, but maybe that’s because it reminds me of something my friend C once said in Rochester’s defense.

I was glad to see that the script cut much of the over-the-top stuff, but the film does lack a bit of the creepy/quasi-ghostly feel of the book.

This review from Salon.com aligns pretty closely with my reaction, and it’s not too spoilery.