Every year around this time I like to recap the past year’s spooky movie viewing. Perhaps you’ll find something here to enjoy during your Halloween weekend festivities? Please share your own recommendations in the comments!

[All plot blurbs and metacritic scores are from imdb.com.] 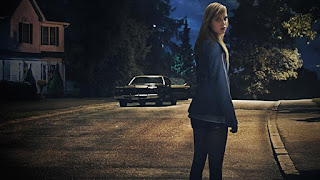 It Follows (2014)
A young woman is followed by an unknown supernatural force after getting involved in a sexual encounter.
This indie film seemed to be the darling of many critics — Entertainment Weekly reminded me of it over and over in the months following its release. I don’t think I had unreasonably high expectations, but I was let down. Perhaps I just didn’t appreciate the concept of a sexually transmitted ghost/demon. I didn’t connect to the characters, so the horror wasn’t as effective it could have been. But I have to give it credit for being different. (Available for purchase/rental from various vendors)
Watch the trailer. (Metascore: 83/100) 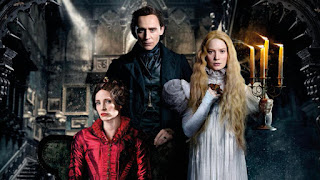 Crimson Peak (2015)
In the aftermath of a family tragedy, an aspiring author is torn between love for her childhood friend and the temptation of a mysterious outsider. Trying to escape the ghosts of her past, she is swept away to a house that breathes, bleeds – and remembers.
A gorgeous film dripping with Gothic iconography, Crimson Peak is disturbing, certainly, but a bit too “on the nose” to be scary. I wish del Torro had focused less on ghostly special effects and more on the horror of what we can’t see. Still, it’s quite a spectacle and, in my opinion, deserves a second viewing. (In theaters now.)
Watch the trailer. (Metascore: 67/100) 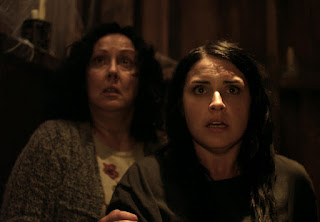 Housebound (2014)
Kylie Bucknell is forced to return to the house she grew up in when the court places her on home detention. However, when she too becomes privy to unsettling whispers & strange bumps in the night, she begins to wonder whether she’s inherited her overactive imagination, or if the house is in fact possessed by a hostile spirit who’s less than happy about the new living arrangement.
This film from New Zealand is quirky and character-driven, with plenty of humor to balance the horror. It takes risks, and perhaps not all of them pay off, but I appreciate the attempt. (Netflix streaming, also available for purchase/rental from various vendors]
Watch the trailer. (Metascore: 76/100) 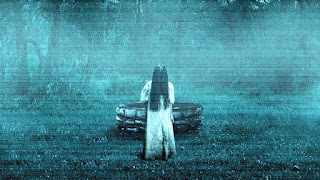 The Ring (2002)
A journalist must investigate a mysterious videotape which seems to cause the death of anyone in a week of viewing it.
People have recommended this film to me for years, and now I see why. It’s not without its flaws, but the performances are strong (I love Naomi Watts!), and the horror lingers long after the film is over. I particularly enjoyed the film-within-a-film component — I love stories that involve the close study of clues in a film strip, photograph, or sound clip. STRONG warning for animal horror/violence. (Available for purchase/rental from various vendors.)
Watch the trailer. (Metascore: 57/100 — surprising since this is considered a horror classic?) 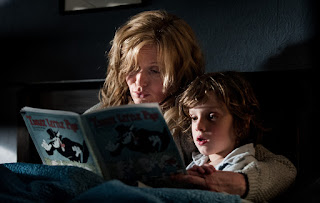 The Babadook (2014)
A single mother, plagued by the violent death of her husband, battles with her son’s fear of a monster lurking in the house, but soon discovers a sinister presence all around her.
Anyone wishing to study tension in film should take a look at this Australian/Canadian offering — at times the tension and dread are almost unbearable. Essie Davis (Miss Fisher!) is brilliant as a single mom struggling with grief and her son’s seemingly overactive imagination. One of the best horror films I’ve seen. [Netflix streaming, also available for purchase/rental from various vendors)
Watch the trailer. (Metascore: 86/100)