Our final tea adventure of the summer took place at The Grand Hotel on Mackinac Island. We warmed up with a hike to Fort Mackinac, followed by an 8 mile bike ride around the island. By the time we reached the hotel we were ready for refreshment. 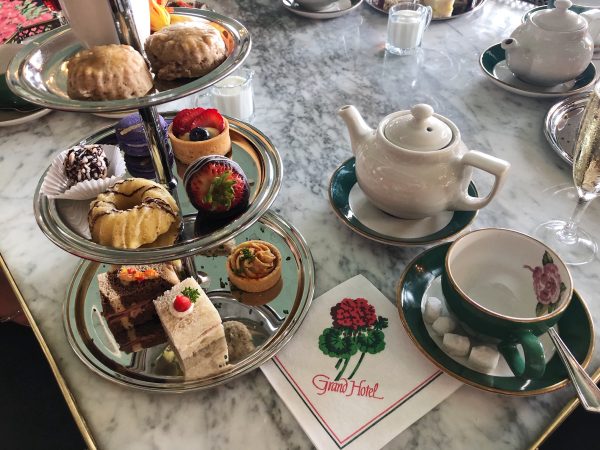 Tea service begins at 3:30 in the hotel parlor and is accompanied by live music. (We were treated to the harp during our visit.) The hotel has streamlined the menu, making it easy for patrons to relax and enjoy the experience. For tea they only offer English Breakfast, but their blend was so delicious that I later purchased a bag to take home with me. In addition they offer a choice of champagne, sherry, or sparkling juice. 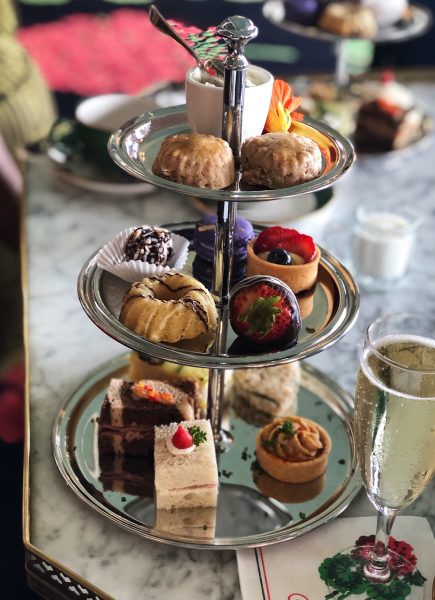 Our tiered trays were delightful. For sweets there were scones with cream, chocolate-covered strawberries, fruit tarts, Kentucky butter cake, violet macarons, and coconut chocolate balls. For savories we enjoyed hummus tarts and roast beef on rye, along with cucumber, ham, and turkey sandwiches. I was pleasantly sated and yet still prepared to hop on my bike for more adventures. 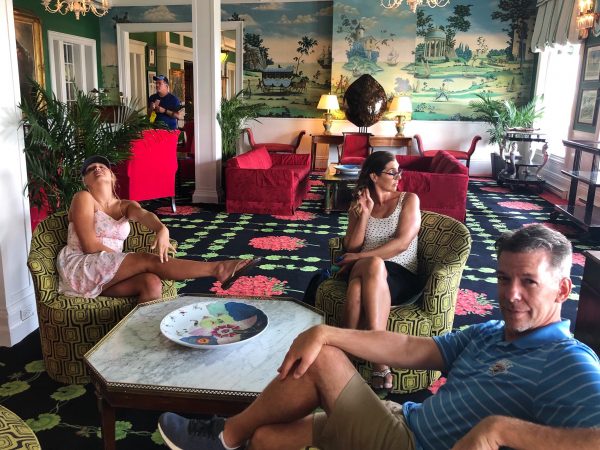 I couldn’t resist sharing this shot of my husband and friends affecting a “languidly posh” attitude whilst we waited for our tea. The setting truly is elegant, don’t you think?

Learn more about Afternoon Tea at The Grand. Do note that it is rather expensive–especially with the added $10 per person for non-residents of the hotel–but after your delicious tea you can burn calories by wandering the beautiful grounds. There’s so much to see!

While on the island I kept fantasizing about the sort of mystery that might be set there. (Here’s what I found when I searched “Murder + Mackinac” on Amazon.) It’s only reachable by ferry or airplane and doesn’t allow cars, just bicycles and horse-drawn wagons. That said, there are plenty of people–entire families–who live there year round. The hotels don’t stay open, but the schools and many of the stores do! I would love to stay there for a month in winter, especially after watching this little video: