Friday Favorites: It started with a photograph

A couple of things to share today, and though it may seem like a stretch, they actually are related. 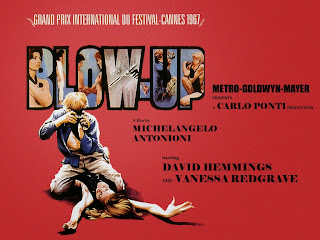 I first saw this film as a child during a weekend visit at my dad’s house. Dad had that wonderful new invention called “Cable TV” and through its magic I was introduced to all sorts of interesting movies, current and classic. Unfortunately I didn’t catch Blow-Up from the very beginning, but I managed to tune in at a critical moment — Hemmings’ character, an arrogant and affected photographer (parodied delightfully in Austin Powers years later) wanders London with his camera and ends up taking photos of a couple embracing in a park. The woman approaches him, agitated, and asks for the film back. But when she comes to his flat later, he gives her the wrong film. He then develops the actual roll from the shoot, and through a series of blow-ups, discovers that something sinister may have happened at the park.

The scene depicting his discovery is so beautifully shot and compelling, but the resolution (or lack thereof) was incredibly frustrating to me as a kid. I thought maybe I’d missed something at the beginning of the film, and I’ve been wondering for decades what it all meant. Well, in re-watching it this past weekend, I realized the film really isn’t about the mystery of a possible murder. Rather, it is a fascinating character study. Roger Ebert described it best:

The film is about a character mired in ennui and distaste, who is roused by his photographs into something approaching passion. As Thomas moves between his darkroom and the blowups, we recognize the bliss of an artist lost in what behaviorists call the Process; he is not thinking now about money, ambition or his own nasty personality defects, but is lost in his craft. His mind, hands and imagination work in rhythmic sync. He is happy. (See the entire review here.)

As a kid (who really wasn’t old enough for the film anyway) I wanted the story to be about the mystery, and I desperately wanted that mystery to be solved. 30+ years later I appreciate the film for its ambiguity.

Favorite thing #2, in which we come to the related topic (yes, really!) of Ghostlight and the fact that ARCs are out in the world! 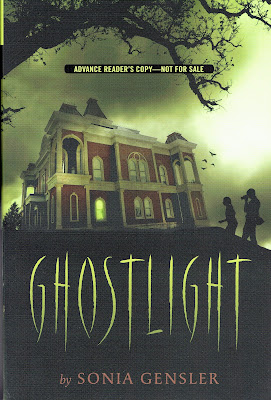 First of all, Weeeeeee!

Now to the connection . . . we have a film for adults (considered nearly pornographic in its day — take it from me, those scenes are the least compelling element) and a book for middle grade readers (& up). What could these two things possibly have in common? Well, somewhat like in Blow-Up, the mystery in Ghostlight starts with a photograph. This photograph features something it logically shouldn’t, which leads to a project, a betrayal, and, ultimately, an investigation. Though this “clue in a photograph” idea is not particularly unique, I know the seed for it was planted in my brain all those years ago when I watched Blow-Up and really wanted that mystery to be solved. Also, strangely enough, I think one of the characters in Ghostlight was probably, subconsciously, inspired by the main character in Blow-Up. Julian Wayne isn’t quite as reprehensible as Thomas (though he was darker in earlier incarnations of the story). He is similar, however, in that he’s arrogant and obsessive and grows pretty impatient with people who don’t appreciate his passion for filmmaking.

And look here — we have official flap copy! 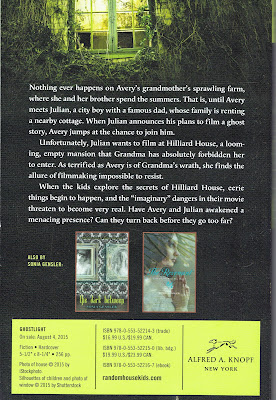 Isn’t that creepy image of the window SO COOL? Please allow me to type out the plot blurb, in case you can’t quite read it in the image:

Nothing ever happens on Avery’s grandmother’s sprawling farm, where she and her brother spend the summers. That is, until Avery meets Julian, a city boy with a famous dad, whose family is renting a nearby cottage. When Julian announces his plan to film a ghost story, Avery jumps at the chance to join him.

Unfortunately, Julian wants to film at Hilliard House, a looming, empty mansion that Grandma has absolutely forbidden her to enter. As terrified as Avery is of Grandma’s wrath, she finds the allure of filmmaking impossible to resist.

When the kids explore the secrets of Hilliard House, eerie things being to happen, and the “imaginary” dangers in their movie threaten to become very real. Have Avery and Julian awakened a menacing presence? Can they turn back before they go too far?

So there you have it! I no longer have to ramble nonsensically about the premise of this book, for that sums it up pretty nicely. Perhaps I’ll give one of these ARCs away before too long? Stay tuned! And HAPPY FRIDAY!!!