It’s that time of year when I especially crave ghost movies, so this past week I revisited some old favorites and tried a couple of new (to me) ones. I have two American and two foreign films to offer. All of them are character-driven, slow burn sort of horror films — not the type to rely on cheap scares. Maybe you’ll see something you want to try this weekend? 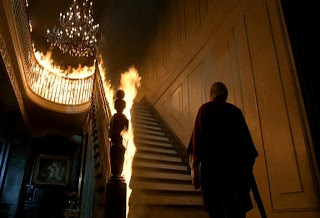 The Changeling (1980), starring George C. Scott.
A grieving man rents a beautiful old house in Portland with the hope of moving on with his life and career. But something in the house disturbs his peace. Goofy murderous rocking chair aside, this is a very atmospheric story with an incredibly sympathetic protagonist. (Oh! If you don’t feel for him after the first scene, you have no heart.) The camera work is gorgeous — long tracking shots that make you feel as though you’re wandering through the house. There’s an excellent séance scene, too. I love the fact that Alejandro Amenábar, director of The Others, has praised The Changeling as one of his all-time favorite horror films. It is very dated, yes, but so lovely and eerie! (I’m not linking you to the trailer because it’s pretty silly.) 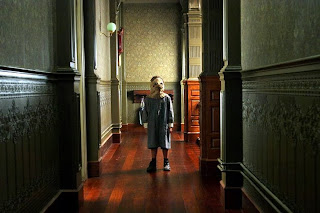 El Orfanato/The Orphanage (2007), starring Belén Rueda.
A woman purchases the orphanage that sheltered her as a child, planning to turn it into a home for special needs children. Her son makes a friend within the house — an invisible but very insistent friend — and soon thereafter disappears. I saw this film in the theater when it first came out, and I remember screaming during one scene, but overall, it utilizes tension and dread rather than sudden shocks. It contains one of my favorite paranormal investigation scenes EVER, featuring the gloriously spooky Geraldine Chaplin. Like The Changeling, this one will pull at your heartstrings, and I defy you not to cry at the end. (Here’s the American trailer, but I warn you that it’s a bit overblown.) 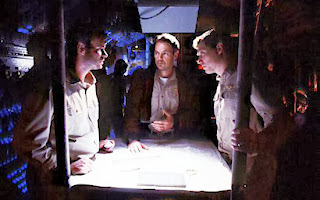 Below (2002), starring Bruce Greenwood (and a gaggle of familiar actors)
Okay, all I have to say is this — HAUNTED SUBMARINE. It gives me chills thinking about it even now, because I can’t imagine a location more claustrophobic than a submarine. Anyhoo, this film starts with a WWII American submarine crew picking up survivors of a sunken boat, one of whom happens to be a female doctor. Disruption and spookiness ensue. This film is much more about suspense and tension than horror, and I’m shaking my head as to why I’ve never heard about it until now. It was directed by the guy who did Pitch Black and the screenplay was co-written by Darren Aronofsky! Plus it features LOTS of familiar faces, including the already mentioned Bruce Greenwood (Captain Pike!), Matthew Davis (Alaric in Vampire Diaries), Scott Foley (Noel! Jake Ballard!), and the always spectacular Olivia Williams (who was lovely in Miss Austen Regrets, among other things.) Very cool film, very much over-looked. (Check out the trailer–same annoying voice-over guy. *sigh*) 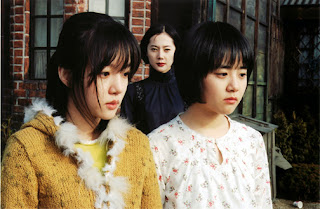 Janghwa, Hongryeon / A Tale of Two Sisters (2003), starring Jung-ah Yum and Su-jeong Lim
I’m not sure I can be articulate about this Korean film. It is CREEPY. Definitely the most horrific film on my list. But it’s also gorgeous, mysterious, and haunting on multiple levels. So difficult to explain the plot, so I will just tell you it’s about two sisters with a history of mental illness, an evil stepmother, and a ghost. I need to watch again to fully comprehend the timeline and backstory of the characters because it’s a subtle, complex film that leaves a lot of the work up to the viewer, which I appreciate so much. It shook me up more than any ghost film I’ve seen recently, but keep in mind that it is slow-paced and enigmatic. And so much better than the 2009 American remake, The Uninvited, which was fine, but not nearly so powerful. (Watch the trailer — blessedly free of voice-over!)

As always, let me know if you have any suggestions. I’m getting to the point where I feel like I’ve SEEN ALL THE GOOD GHOST MOVIES. It’s a very sad state of affairs . . .