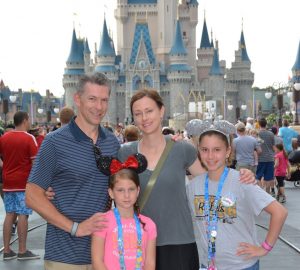 It’s been a week since we returned from a Disney World trip with my nieces, and it surprises me how much I miss the place. There was a time when I thought I was too old for Disney, but now I find myself already fantasizing about another visit. What is it about Disney that keeps calling me back? I had a little think about it, and here’s what I came up with: 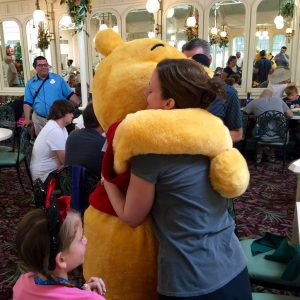 1. There’s something deeply satisfying about hugging a large furry creature you recognize from childhood stories.
We booked several character meals — all for my nieces, right? Well, the grownups enjoyed them just as much. My very favorite dinner was at the Crystal Palace, where we met characters from Winnie-the-Pooh. How lovely to get a hug from Pooh Bear! Tigger was particularly cuddly, and we all had fun pulling mopey faces with Eeyore. One of my favorite pics of a character hug, however, is this one of Steve with Olaf. Doesn’t Olaf seem absolutely delighted? 😉 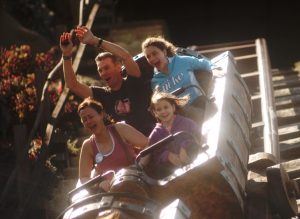 2. I still love Disney rides!
Above you see us riding the Seven Dwarfs Mine Train, and the camera caught me mid-scream. We’re all familiar with that rush of adrenaline–that fear/joy combination of losing control. But Disney also offers the opportunity to take control, at least in our imaginations. Interactive rides like Toy Story Mania, Test Track, and even Tomorrowland Speedway give you the illusion of control while being entirely safe and family-friendly. My favorite, Mission: Space, was utter fantasy — nothing I did affected the outcome of our journey to Mars, but IT FELT GREAT. I was Han Solo, you guys! Or better yet, Samantha Carter! I DID A SLING-SHOT MANEUVER AROUND THE MOON! I haven’t screamed or whooped that much in a long time.

(Note: I love the “green” level of Mission: Space. The girls wanted to try “orange,” which offers spinning and g-forces. They were perfectly fine, but I was a bit urpy afterwards. No more orange for me.) 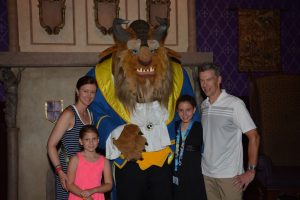 3. Even old fogies like me still experience moments of “the flash” at Disney.
“The Flash” is the best phrase I could conjure, and I stole it from Lucy Maud Montgomery. Her character, Emily Starr, defined it as being:

very near to a world of wonderful beauty. Between it and herself hung only a thin curtain; she could never draw the curtain aside -but sometimes, just for a moment, a wind fluttered it and then it was as if she caught a glimpse of the enchanting realm beyond -only a glimpse- and heard a note of unearthly music.

As a kid at Disney, I would often have moments where I sensed the fairy world all around me and, at times, could almost see it. I felt “the flash” when walking through Cinderella’s castle and when riding “It’s a Small World” and other “little kid” rides. (I know some folks hate “It’s a Small World,” but as a kid it filled me with joy to see scads of beautiful children who, apparently, HAD ALL THE POWER. No adults necessary!) I even felt the flash as a teen in the World Showcase, when visiting the different countries and feeling, for a moment, like I was actually in those foreign lands. As an adult, I have a different sort of flash — that feeling of connecting with my younger self. I felt it on all the kiddie rides. I felt it when my nieces met Anna and Elsa and other characters. I certainly felt it during the Frozen sing-along. And it nearly overwhelmed me at the Beast’s castle (see above).

It seems “Disneyfication” is a bad word these days. People crave authenticity, and I for one love to visit real castles, cottages, villages, mountains, and lakes. But I am also a total sucker for Disney magic. Yes, it’s all a [very expensive] illusion. There are crowds, there is HEAT, there are meltdowns all around. But there also are moments of joy and wonder that take me straight back to childhood. I’m so glad we’ve been able to experience Disney World twice with my nieces. They definitely contributed to our sense of enchantment!

Okay, Disney fans — what have I missed? What do YOU love about Disney?