Friday Favorites: a miscellany of female characters and creators

It’s nice to have regular topics on the blog, and with this post I recommit to discussing favorite books, films, TV shows, and whatnot in “Friday Favorites.” If anything on this list strikes a chord, do let me know in the comments. (I’m also very open to your suggestions for possible new favorites!)

Alias Grace (2017) — In 19th-century Canada, a psychiatrist weighs whether a murderess should be pardoned due to insanity. (imdb.com)

I’ve never read the book (in fact, I’ve only read one Atwood novel–The Blind Assassin), but my friend Brandi insisted I watch this series. She knows me all too well! It features so many of my favorite things: a Victorian setting, Gothic and possibly paranormal elements, feisty women, unreliable narrators, not to mention oodles of scheming, passion, and obsession on the part of the characters. And it’s all based on a real case. Best of all, this mini-series was directed by a woman, based on a screenplay written by a woman, and adapted from a novel written by a woman. How inspiring!

Alias Grace is available on Netflix. 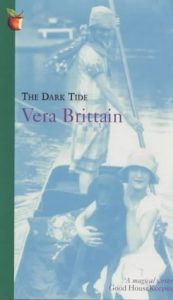 After watching the 1979 mini-series of Testament of Youth (hard to find, but well worth tracking down), I wanted to read Brittain’s first novel, The Dark Tide, published in 1923. It’s a flawed book and yet still quite readable (particularly the bits set in Oxford). Brittain herself described it as “melodramatic and immature,” but the strangest part for me was that she obviously based the (quite fluffy) protagonist on her friend Winifred Holtby and, although Brittain claims this was unconscious, the (dark and sexy) antagonist is very much like the author herself. I don’t necessarily recommend this novel unless you’re very interested in Brittain. I’m glad I read it, however, not the least because it prompted a read of an early novel by Winifred Holtby for comparison. 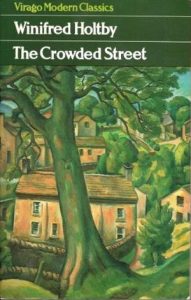 The Crowded Street was Holby’s second novel, published in 1924, and I have to say it was much easier to love than The Dark Tide, for it relies more on tension than melodrama. In the midst of the Great War, Muriel Hammond searches for purpose and contentment in a world where the greatest success for a woman is a “good marriage.” The story meanders here and there, and one section could have been the inspiration for the setting of Stella Gibbons’ Cold Comfort Farm, but overall I found it a very worthwhile read. 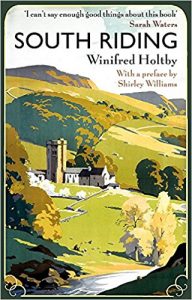 If you read only one book by Winifred Holtby, however, it should be South Riding. Set in Yorkshire in the early 1930s, its political awareness and brilliant character development reminds me very much of Middlemarch by George Eliot. South Riding is a story of local politics, but don’t let that deter you–it’s so beautifully written, very accessible, and you will fall in love with the characters. This novel definitely numbers among my top ten favorite reads.

The mini-series starring Anna Maxwell-Martin–available to stream from Amazon and Vudu–is a much-condensed version of the story, but still worth watching, in my opinion.

And what about you? What have you seen or read lately that you would recommend?